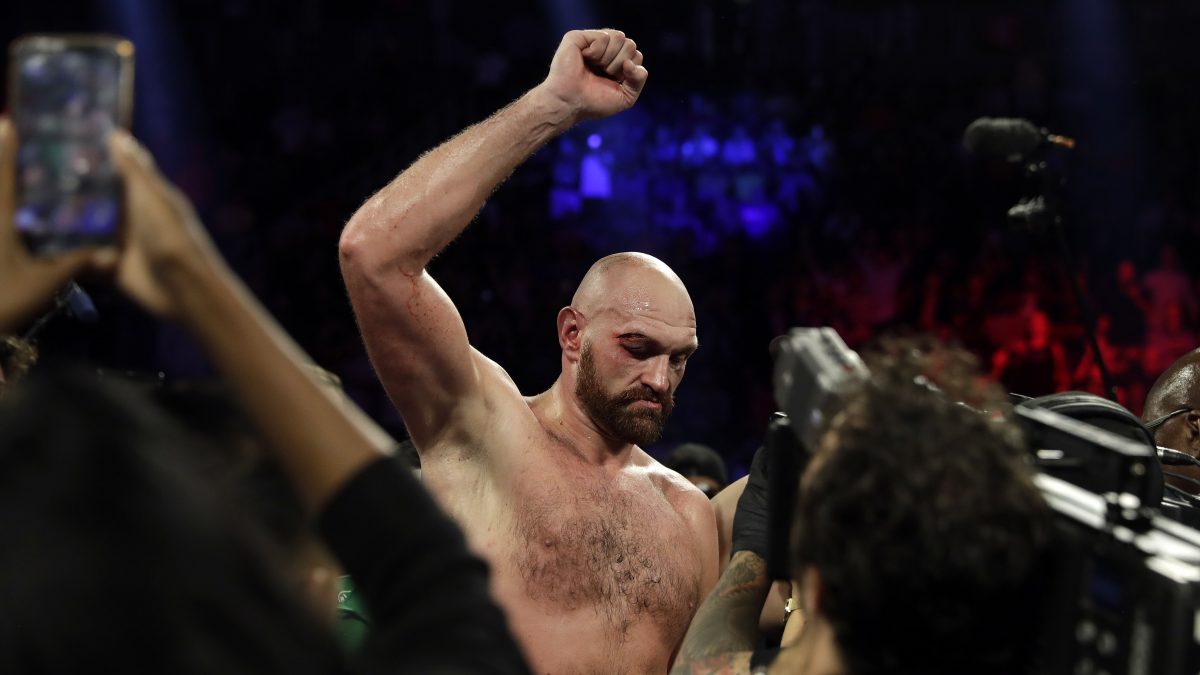 Tyson Fury had to take up talking for two at today’s press conference to officially announce, as Deontay Wilder sat silent in a chair on stage after making a brief opening comment, refusing to take questions from the media or expand on anything else.

“Enough said. Time to cut off his head,” Wilder said. “Come July 24th, there will be bloodshed.”

It is unclear if this was meant to be a rap. If so, the delivery was a little stilted.

“All this bloodshed stuff, not so certain. Heard it all before, to be fair,” Fury replied. “He said this last time — ‘decapitation,’ ‘bloodshed,’ all that, and we all know what went down there.”

“I look forward to the challenge. I hope he’s going to bring something different than the last time — he needs to, let’s face facts,” Fury added. “I know he’s taken on (new trainer) Malik (Scott), very experienced guy in boxing, had a lot of fights himself. Let’s hope he can bring the best out of Deontay Wilder.”

Fury had thoughts on Wilder not answering questions, too.

“It shows how weak of a mental person he is, and how much the beating in the last fight took from him emotionally in his life. I was worried about Deontay Wilder for quite a while,” he said. “Obviously he’s doing his little thing with his earphones on, and doesn’t want to answer any questions. That’s up to him, but I’m here to promote a fight.”

Fury said he expects we’ll see the same Deontay Wilder we always have seen, and predicted he’ll finish him quicker than he did in 2020.

“Deontay Wilder’s a one-trick pony, he’s got one-punch power. We all know that. Great. What I’m going to do this time, is I’m going to run him over like I’m an 18-wheeler and he’s a human being,” he said.

“I guarantee he does not go past where he did before. I’m building my weight up, I’m trying to get up to 300 lbs for this fight, because I’m looking for a big knockout straight away. I don’t believe he’s mentally, physically, or emotionally involved in this fight. I think he’s doing it for the wrong reasons. When people do things for the wrong reasons, they always wind up getting hurt.”

The two engaged in a long staredown to end the press conference, neither budging even when Crystina Poncher instructed them to turn and face the cameras instead of one another. At that point, the entourages for both fighters joined the stage, as did security, who had no problems with the fighters but could have with the hangers-on, potentially. Instead, the riff raff repeated catchphrases and jargon at one another, before Wilder eventually left, which Fury’s pals took as a big win.