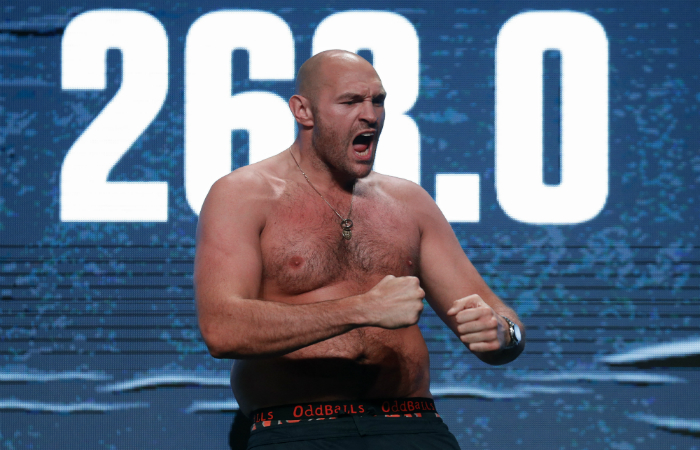 Undefeated heavyweight Tyson Fury (29-0-1) has admitted he expects to retire from boxing after three more fights. The 31-year-old is preparing to take on Braun Strowman at WWE’s Crown Jewel event in Saudi Arabia on Thursday.

After swapping boxing for professional wrestling, the ‘Gypsy King’ is set to return to his usual sport on February 22 to do battle with Deontay Wilder – and it could be the start of his boxing farewell.

“I don’t think I will have many more fights. Maybe another three maximum. That’s it,” Fury told the PA news agency.

He became a unified heavyweight champion in November 2015 with a stunning unanimous decision win over Wladimir Klitschko in Germany.

While the Ukrainian finished his career at the age of 41 with 64 wins from 69 fights, Fury is thinking of calling it a day in the not too distant future after 30 bouts, 29 victories and one controversial draw with Wilder last year.

“I don’t know what Klitschko’s motivation was. I think I am coming to the tail end of my boxing career at the ripe old age of 31,” he said.

“It’s a young man’s game. I’ve had my time in the sun. A few more fights and I will relax on the beach somewhere.”

For many boxers, the desire to hold all the belts is a big motivation, but Fury has already had that privilege after beating Klitschko four years ago and in the process becoming the lineal heavyweight champion of the world.

He subsequently had to relinquish all the belts and currently, Wilder holds the WBC title and Andy Ruiz – who shocked Anthony Joshua in December – has the WBA, IBF and WBO titles.

“There have been 44 lineal heavyweight champions and I am No.44, so whatever alphabetical titles exist out there – and there are a lot of them – I am not interested in them. I have won every one.”

“I have tonnes of belts at home and plenty that I hang my trousers with. Belts are very useful and the most useful belt is the one I am wearing today to hold my trousers up.”