Tyson Fury wants to give Deontay Wilder ‘another battering’ 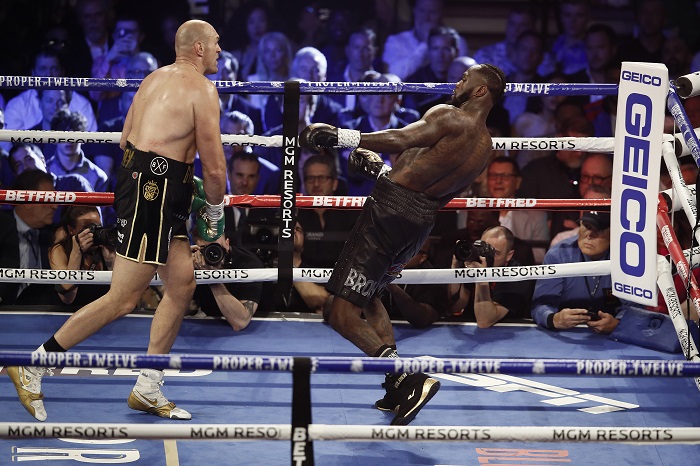 WBC heavyweight champion Tyson Fury made an appearance on social media to talk a bit about his upcoming plans once boxing returns to action and his thoughts about who he prefers to fight right out of the gate.

Fury on his reflections from fighting Wilder:

“Everyone said ‘the only chance Tyson’s got is if he outboxes him’…but I told everybody who’d listen that I was gonna knock Wilder out because something happened, I seen something in the first fight. I knew he couldn’t beat me because if he was ever gonna beat me, he’d beat me after I’ve been three years out the ring with only two shitty comeback fights. And he couldn’t do it then. He couldn’t even keep me down when he had me down.

“So I knew he had hit me with his best shots and I got up from them. I knew I couldn’t be defeated by him. Mental strength, willpower, determination, and the balls to say ‘right, I’ma put it straight on you, son. See how you react to that.’

“I think he was surprised because I attacked him from the first second of the first bell. And I always wanted to get a bit of payback from the first fight because he put me down twice. And in the second fight, rematch, I think I put him down three or four times, and it completed the greatest comeback in the history of boxing.”

“I’ve got some massive news coming up in the next week or so, to announce something, so keep tuned for that but, yeah, I’ve got the rematch with Wilder on as well, at some point, and then we got the two AJ fights — well one, and obviously when I batter him he’ll want a rematch.”

On who he wants to fight first between Wilder and Joshua:

“Well Wilder’s got a rematch clause…some newspaper reported that he wanted $10M to step aside…but I’m not paying him no money to step aside. I’d rather take his scalp again. I wouldn’t pay him $2M to step aside, I’d rather give him another battering again.

“I’m take him out again for the third time, hopefully end of the year, and then we’re gonna go into 2021 for the biggest fight in boxing history between two undefeated British heavyweights, me and AJ, and we’re gonna battle it out for all the gold.”Fury on a fight against Joshua being bigger than Tyson-Lewis:

“Yeah, because we’re both undefeated. Me and Wilder was big, a big, big, big fight since the 1970s because we were both undefeated champions. And usually you get these fighters that have already been beaten, like Tyson was at the end of his career when he fought Lewis, and so was Lennox. Lennox didn’t fight many times after that.

“There used to be a three-headed monster in this division, it was me, Wilder, and Joshua. And then Ruiz knocked out Joshua, burst that bubble, and I broke in the Bronze Bomber, and then three became two, two became one. And now I’ma stand alone solider. They all need to come through me now, and it’s not an easy task.”