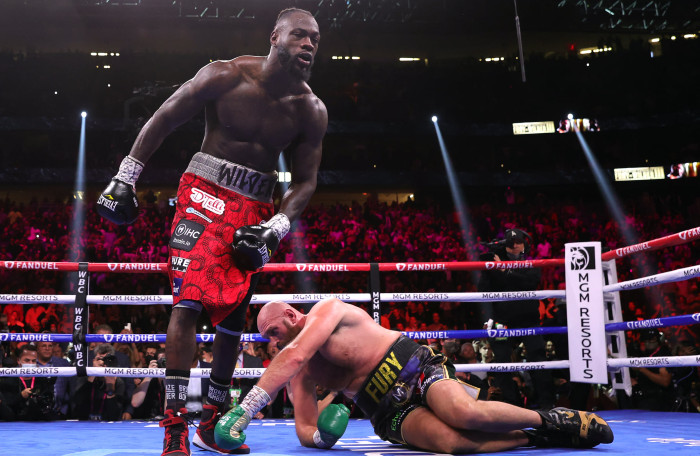 Yes, we’re a week into 2022 and we just had a pay-per-view boxing event last Saturday, but why should that disqualify me from doing an awards post for the best from 2021? It might not have necessarily been an all-time great year for the sport but we were not short on high-quality fights, the best against the best, remarkable upsets, and wicked KOs. All things considered it as a positive year for boxing and that’s leaving out the circus Jake Paul fights.

Fight of the Year – Tyson Fury vs. Deontay Wilder III

Who doesn’t love a heavyweight thriller at the highest level? Fury vs. Wilder III was by far the best of this trilogy and the most violent. It looked as if Fury was on his way to another one-sided win when he dropped Deontay in the third round. In a rapid turn of events, Wilder’s vaunted right hand put Fury down twice in the fourth round and suddenly it was anyone’s fight. Fury did inevitably pull away and if not for Wilder’s insane toughness he’d have been knocked out far sooner than the 11th round.

There’s nothing better than a big fight over-delivering, and this fit the bill as an absolute classic.

KO of the Year – Oscar Valdez vs. Miguel Berchelt

I could’ve doubled up Fury’s win over Wilder as KO of the Year too, but among the big fights there wasn’t a more visually terrifying knockout than what Oscar Valdez did to Miguel Berchelt to win the WBC junior lightweight title. This was a fight billed as a slugfest and instead it was mostly a beatdown by Valdez, who put Berchelt down twice before the exclamation point to cap off a brilliant performance. This was when the Top Rank bubble was still in effect so there wasn’t a full house of fans, but much like the UFC APEX, I think the sound from these punishing punches is amplified by the lack of a crowd.

Upset of the Year – George Kambosos vs. Teofimo Lopez

There were a ton of notable upsets in the ring in 2021, but none more impactful than what George Kambosos pulled off against Teofimo Lopez. The Aussie was a hefty underdog against the unified, undefeated lightweight champion, and after numerous postponements and the flip from Triller to DAZN, they finally faced off on Thanksgiving weekend in New York.

Lopez was decked in the opening round, came back to knock Kambosos down in the 10th round, but otherwise was outboxed for a majority of the contest. Kambosos took a deserved split decision, shutting up some stupid people who doubted him, and now he holds the cards at 135 lbs.

Consider this another bout that was a Fight of the Year contender.

Fighter of the Year – Canelo Alvarez

This is not debatable. Canelo fought three times and won by stoppage every time, unifying the super-middleweight division in the process. His run really started in December 2020 when he defeated Callum Smith to win the WBA and vacant WBC titles, but we’re only revisiting his work from 2021. He took a stay-busy fight in the form of a mandatory title defense against Avni Yildirim, whom he stopped in three rounds.

In May, with over 60,000 in attendance at AT&T Stadium in Texas, Alvarez handed Billy Joe Saunders his first defeat, broke his orbital in the process, and took the WBO title off of him.

Then to wrap up his busy schedule, Alvarez became undisputed champion with an 11th round KO of Caleb Plant.

Best Win of the Year – Oleksandr Usyk vs. Anthony Joshua

You know I had to get in some Usyk love! And why shouldn’t I? Boxing’s ultimate road warrior went into Tottenham Hotspur Stadium in London and took all of Anthony Joshua’s belts back home to Ukraine. It was an excellent fight that showed the former undisputed cruiserweight champion’s ability to defeat the elite at heavyweight. Joshua was outboxed and he was hurt multiple times over, including in the final round.

Usyk and Joshua are slated for a rematch in the spring, and perhaps we could see Usyk against Tyson Fury later this year.

Women’s Fight of the Year – Mikaela Mayer vs. Maiva Hamadouche

Top Rank really doesn’t have any commitment to women’s boxing outside of Mikaela Mayer, and yet they produced the most entertaining fight of 2021. Mayer’s 10-round war with France’s Maiva Hamadouche saw her unify the WBO and IBF titles and it really showed Mayer’s mettle to be tested in a non-stop action bout.

Prior to November 13th, Baumgardner had never competed in a 10-round fight (which is still the maximum for women’s boxing). She was the challenger to Harper’s WBC 130 lbs title, and the American dominated in the Englishwoman’s backyard. A beautifully timed right hand froze Harper and put her asleep while she was standing, prompting a brilliant referee stoppage to prevent any unnecessary punishment.

Baumgardner parlayed that monumental win in enemy territory by signing with Matchroom Boxing. Be on the lookout for Baumgardner making waves in 2022, potentially unifying titles with Mayer in what could be an absolute classic.

I could give this to Amanda Serrano considering she got to be a main event fighter in Puerto Rico, as well as serve as the PPV co-feature in consecutive Jake Paul cards, but I’m going a different direction. Seniesa Estrada did gain notoriety for that absurd 7-second KO against the way overmatched Miranda Adkins, but let it be known that Estrada is a legitimately terrific boxer. Estrada fought three times in 2021, winning a fun scrap over Anabel Ortiz to take her WBA minimumweight title, followed by a decision over Tenkai Tsunami up at junior-flyweight to win her second world title, then defending that minimumweight strap by KO against Maria Micheo Santizo.

Estrada is powerful, sharp, and outside the ring she’s shown natural broadcasting skills when working for DAZN. Golden Boy has a potential star for women’s boxing in ‘Super Bad’ Estrada.