Alexander Volkanovski disappointed to not ‘end that chapter’ with Max Holloway 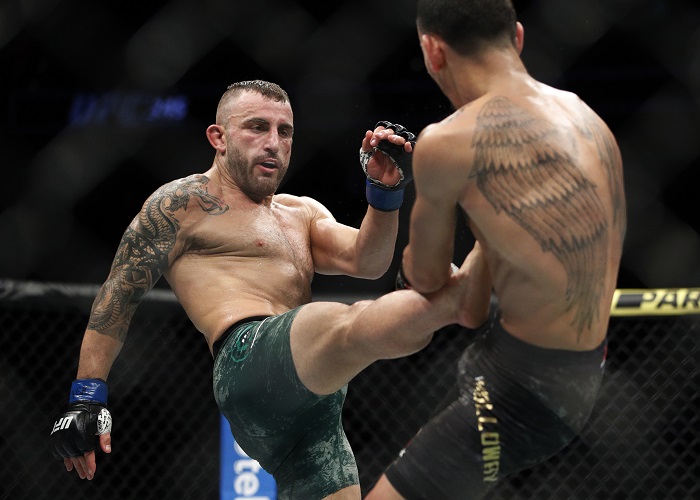 For UFC featherweight champion Alexander Volkanovski, the saga between him and Max Holloway is one that is seemingly never going to end.

Despite being up 2-0 in the series, Volkanovski was tentatively scheduled to face his Hawaiian rival for a third time on March 5 at UFC 272 before an injury dropped Holloway out of the planned matchup. Volkanovski’s next title defense instead shifted to an April 9 date against “The Korean Zombie” Chan Sung Jung at UFC 273 — a move that ensured Volkanovski will be forced to continue thinking and hearing about Holloway for the foreseeable future, just as he has since their rivalry first began in mid-2019.

“I was disappointed,” Volkanovski admitted recently on The MMA Hour.

“Man, I just was really looking forward to that fight. I really was. And I just had started — I was ready to get into camp and get things going and end that chapter, and all that type of stuff. But as everyone says — well, ‘Blessed’ [Holloway] says — it is what it is. But it was unfortunate. Of course it’s a big fight, I know people wanted to see it. But what do you do? That’ll just have to wait until later.”

Once Holloway’s withdrawal was official, Volkanovski said his top priority was simply being able to find any sort of replacement that made sense. He’d hoped to have a busy 2022 after fighting only once in each of the past two years, so keeping his March 5 date was his first choice. But ultimately he had to work with the options available to him, so he and his team quickly settled on bringing in the one-time title challenger Jung for UFC 273.

“I made it clear straight after my fight [in September], I wanted to fight regularly,” Volkanovski said. “Even fighting in March was later than I would’ve liked, because I wanted to go and get some defenses in. I want to fight as much as I can this year.

“So the boys talked with [the UFC], they chatted to me, and then just [Jung] was the only [option] that made sense. And again, they know what I’m like. If I was going to fight guys that don’t really deserve it, I don’t like that. That’s not what I’m what I’m about. I’m about, give me the guys that make sense. He’s an OG of the sport. You talk about legacy, he’s one of the biggest names in the division as well. I want to take out all the guys, the legends of the featherweight division, and he’s one of them. And he’s coming off a win, a good win off Dan Ige. So it’s the only one that makes sense, and that’s why we wanted it.”

In many ways, Jung’s credentials speak for themselves. The 34-year-old is a fan favorite from the WEC days who has previously fought for a UFC title and was just one win away from a shot at Volkanovski’s belt in late 2020 before he ran into Brian Ortega. That loss is Jung’s only setback of the last three years and was preceded by highlight-reel first-round knockouts of Frankie Edgar and Renato Moicano. “The Korean Zombie” won a dominant decision over Ige in his most recent bout last June.

Jung and Volkanovski also have somewhat of a contentious history stemming back to Jung’s pursuit of the belt prior to the Ortega fight.

So in Volkanovski’s eyes, the bout checked all of the right boxes.

“Of course. It is,” Volkanovski replied when asked if the matchup is personal. “There was a time where he, I guess, decided to play the heel, or his manager, or someone did anyway. And he was there calling us out and saying some things. So yeah, there is a bit of history there. You’ve got to remember, that was before — that’s why he was fighting for that No. 1 contender when Brian [Ortega] and him fought, so it shows you that he was close to that title shot, but it didn’t go his way, so that’s why I fought Brian.

“Now he went back and did what he had to do. And he’s lucky — obviously if Max didn’t pull out, none of these guys would be getting the opportunity maybe, we don’t know, but that’s what happened. So I want to fight, and the UFC wanted us to still fight, so we all agreed that Zombie was the guy to do it with. Again, there is a bit of history. He’s an OG of the division. So let’s make that happen.”

Of course, Volkanovski had no shortage of suitors calling for their shots at his title. From the respectful callouts of Josh Emmett and Jung to the less respectful approaches taken by Giga Chikadze and Yair Rodriguez, Volkanovski was a popular guy at 145 pounds in the days after Holloway’s withdrawal.

But according to Volkanovski, one big name who was perhaps the loudest of all — retired former two-division UFC champion Henry Cejudo — was never actually in the conversation.

“I don’t even mind the guy,” Volkanovski said. “Obviously, we have a bit of fun and he’s always trying to troll me and get under my skin and make that fight happen.

“Again, I get people who are going to say I’m running and whatnot. The UFC never brought up his name, ever. And it was never mentioned to me, it was never even close to an option. How am I going to take it seriously if the UFC doesn’t take it seriously? And I don’t even know if Henry is really taking it serious. But man, I like the guy. He’s got great skills. You’ve you’ve done great things in other divisions. And you retired, so it just doesn’t make sense.

“If there was ever a time that I was going to do it, it probably would be now,” Volkanovski added. “But again, the UFC weren’t going to bring it up. They’re thinking that, what’s the point? You don’t deserve it. And then what if you do somehow get it done — you’re just going to retire and [drop the belt again]? Even though I heard Henry say, ‘Oh, if I do that, I’ll stay,’ I don’t think they believe that. But you wouldn’t have had to worry about that anyway.”