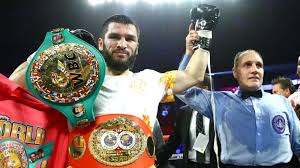 Artur Beterbiev stayed unbeaten and stopped another opponent, putting a brave and hard-nosed Adam Deines away in the 10th round to retain his WBC and IBF light heavyweight titles in Moscow.

Beterbiev (16-0, 16 KO) didn’t exactly look in peak form overall, but it remains to be seen how much of that was simply rust, having not fought since Oct. 2019, or if age, injuries, and a bout with COVID may have taken a bit from him in his immediate upcoming bouts.

Deines (19-2-1, 10 KO) really gave this a great effort and probably fought as well as he could have. He was willing to open up and throw his shots, and landed some along the way. He nicked two rounds on my unofficial card, but it also became clear fairly quickly that he just didn’t have the firepower to keep Beterbiev from marching forward, walking him to the ropes and into the corners, and throwing the shots he wanted.

The German challenger was dropped late in the first round on a counter right hand, but wasn’t down hard. What it showed was that Beterbiev’s power is definitely still there; stereotypically the last thing to go for any fighter, it’s certainly not gone from the Russian mauler yet.

But Deines hung around in the fight, had some moments, and after a ninth round where Beterbiev looked a little lackadaisical in some respects, Beterbiev trainer Marc Ramsay got on his fighter’s case. This was bad news for Deines, as Beterbiev came out hunting, dropped Deines again, and Deines’ corner waved the towel, though their fighter did get up.

You have to give real respect to Deines, who lasted longer and did better than I think almost everyone expected, but in the end Beterbiev was just too strong, too determined, too Beterbiev.

It will be interesting to see how Artur looks in his next fight. He’s 36, has had a lot of breaks in his career due to injuries, management problems, whatever. He’s definitely not getting younger. But Beterbiev is also clearly still a physical force at 175, still the top dog until someone proves otherwise.