Bivol breaks down matchup with Alvarez, says Canelo can be beat 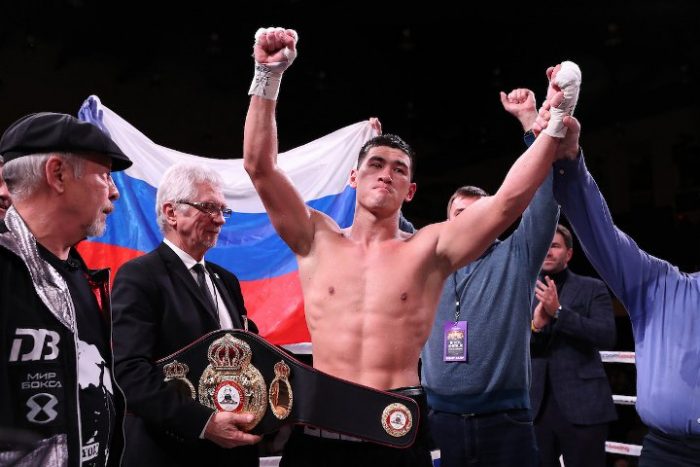 During a video interview with Marcos Villegas of Fight Hub TV, light heavyweight titleholder Dmitry Bivol talks about his big upcoming fight with Canelo Alvarez, why it’s important not to psyche himself out, and his assessment of what he’ll need to do in order to come out victorious. Check out some excerpts from the interview with the full video above.

Bivol on packing a good punch

“Of course I will use every good sides, the power, speed, movement — everything, I should use (to beat Canelo). If I see I could hit him harder, I will do it.”

“Yes, I am bigger, but not big like Sergey Kovalev. I think (I’m) similar size to Canela because I don’t lose too much weight in light heavyweight division. But what about Sergey Kovalev? We all knows, because he said that he didn’t have enough time to preparation. He was empty after his last fight, and then he took fight against Canela and [he wasn’t really confident in his ability to go all 12 rounds].

“Of course you have good power to stop your opponent in the earlier rounds. If you don’t have enough power he will come to you every time, keep coming, keep coming, and he will eat you.”

“In this fight I will of course (take) more risks because opponent is better. He move forward, this is my chance to show all people my skills and if I want to show my skills I have to go on the risks.”

“Of course he has a good power, he has a good skills, but most of people think about him like he’s untouchable or he’s unstoppable, or he has enough power to beat super heavyweights. Sometimes it’s funny to hear about him from people. First of all, he’s a good fighter but he’s a man and he had a loss and draw — it means if you believe in your skills, if you’re good boxer you could make him one more loss.”

“Yes, of course I watch this fights. It was different fights against Mayweather and against Golovkin. Mayweather was just Mayweather, he was better in the speed and he had the more boxing quality. And about Golovkin, Golovkin was more confident, I think, in their first fight. And I thought he should win that first fight. It was close but Golovkin, I think, was better. It’s just, for me, it’s only my opinion, it’s nothing — it’s only my opinion.”

“All their career I was support them. I like their boxing because they use a lot of jabs, I just support them. And I wish them only the best and respect for their career but I’m not a (politician) and I think sports and (politics) is different things, and it’s really sad when sportsmen, former sportsmen, athletes, to (mix) sport and political or something else. They know it, sport, it’s different.

“Of course (I have nothing to do with the conflict). Sport should unite people.”