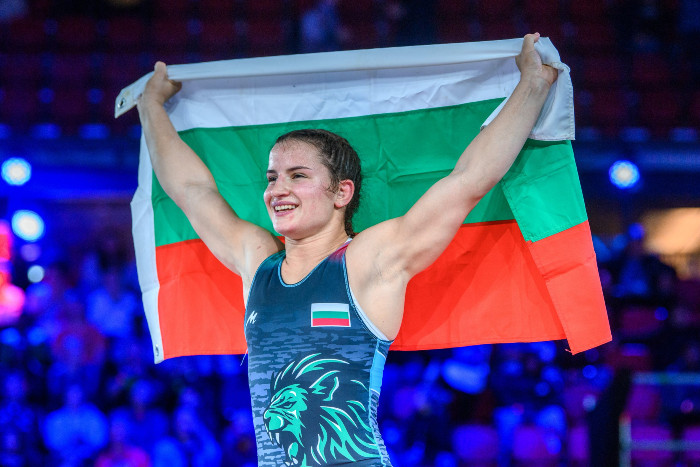 The chants of ‘bravo, bravo’ filled the Dan Kolov stadium as Bilyana DUDOVA (BUL) emerged as the new star at 62kg for Bulgaria.

The world champion at 59kg defeated Bulgaria’s mainstay at 62kg, Taybe YUSEIN (BUL), in the final of the prestigious Dan Kolov-Nikola Petrov tournament,7-2, and laid claim at the Olympic weight. Now, it will be a two-way battle for the spot on the national team for the Paris Olympics.

For a wrestler who has been juggling her weight for the majority of her career, Dudova hopes that she can finally settle in the new weight class which is easier and healthier for her.

“When I was cadet, I was around 60kg but not the best wrestler in Bulgaria,” Dudova said. “There were other good girls, so coaches used to tell me to reduce my weight so I can participate internationally. Otherwise, I will be only training and losing.

“I have been training for 10 years and I was undecided on 57kg or 62kg,” Dudova said. “But 62kg is close to my natural weight so I decided to go for this. Also, with two-morning weigh-ins, it’s difficult to cut weight to 57kg.”

But first, the 24-year-old needs to get past the Tokyo bronze medalist and compatriot Yusein.

In January, she wrestled at her first tournament, the Bulgarian Championships, at 62kg. As expected, she faced Yusein in the final. Dudova lost 2-1, but took the lessons from the loss seriously.

“I lost to her [Yusein] but now it’s reversed,” she said. “This year is just a warm-up for me in this weight. I need some time to adjust accordingly. Training and hard work are the only things that can help you get success. This year may be difficult for me but I’ll do it.”

As far as body weight is concerned, Dudova began her international career in 2013 wrestling at 60kg. Back then, she hoped to be the 63kg wrestler for her country. But Yusein was an established star at the weight. She even qualified Bulgaria for the 2016 Olympics with a bronze medal at the 2015 Worlds.

Dudova had no choice to reduce weight to 55kg. She even went down to 53kg in the hope to qualify for the Rio Olympics. Unfortunately, it only troubled her with health issues.

Soon after Rio, she moved up to 57kg and won a silver medal at Budapest Worlds. But winning the gold at the ’21 World Championships in Oslo, her first world title, gave Dudova the confidence to make the switch to 62kg.

“That was one of the best times for me,” she said. “I was so happy. It gave me confidence which is important to take this big step and move on.”

The European champion, however, is not new to challenges in her life.

She lost her mother at 14 years of age. Brought up by her grandmother, it was just by chance that Dudova ended up in wrestling. Athletics was her first love.

“I was 12 when I first trained in wrestling,” she recalls. “I loved athletics and practiced in 400m. Everyone said that I am perfect for sports.”

During her off-season after athletics competitions, it was her uncle that asked Dudova to pay a visit to the wrestling hall. Her uncle, father and others were regular to the gym for their fitness training.

“I went just for fun,” Dudova, who is a trained Bulgarian folklore singer, said. “The coach asked me to do some pull-ups and I did little. But he liked my strength and asked me to train.”

Since it was off-season, she even participated in a tournament.

“After one month I participated in a tournament I got bronze. I was angry to lose and wanted to win. So I kept training. I lost in the Bulgarian Championships for kids. I trained harder. The ambition to win grew.”

That ambition made her go to the wrestling hall again. Training with boys was the only option and she continued that until making the cadet team for Bulgaria.

For the first four years, Dudova did not finish with any medals until she kick-started her career with a Junior European bronze.

“I am studying all opponents at 62kg,” she says.

As a warm-up before the European Championships in Budapest, Dudova will be in Istanbul for the Yasar Dogu Ranking Series event. There too, she is expected to meet Yusein for the third time in two months.