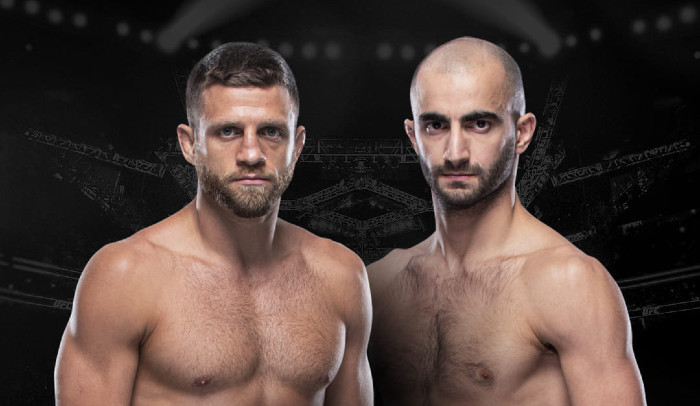 Calvin Kattar is back and better than ever.

For the better part of 25 minutes in the UFC Vegas 46 main event. Kattar was hunting down Giga Chikadze while throwing everything and the kitchen sink at him in order to secure a lopsided unanimous decision victory. From a steady diet of jabs to bludgeoning his opponent with a number of brutal elbow strikes, Kattar just poured on the punishment while leaving Chikadze a bloody mess when the fight was finally finished.

The judges scored the fight 50-44, 50-45 and 50-45 with Kattar earning a much deserved win in arguably his strongest showing since joining the UFC roster.

“Bittersweet — feel like sh*t but also never been better,” Kattar said when reacting to his win. “I feel great. Giga’s a tough fighter.

“They all counted me out this fight. Everybody. Like I’ve been saying, it ain’t everybody that’s counting you, it don’t matter about them, as long as you believe in yourself. That’s all that matters.”

Looking to set the pace at the start of the fight, it was Chikadze who unleashed a blistering kicking attack after cracking Kattar with several stinging shots to the legs and body. Chikadze was also firing some lightning quick punches combined with the kicks that kept Kattar off balance.

Midway through the opening round, Chikadze slipped on a head kick and that allowed Kattar to surge forward for a takedown. From there, Kattar maintained control until looking for an arm triangle followed by a rear-naked choke attempt until the round came to an end.

From that moment on, Kattar just took over the fight.

As the second round got started, Chikadze was able to connect with some of his kicks to the body before going back up top to the head with his punches. The only problem is Kattar just kept moving forward to close the distance, which cut down on the amount of kicks that Chikadze was able to throw or land.

Kattar was consistently landing with hard strikes and while Chikadze was definitely connecting with plenty of his own, he was also constantly fighting off his back foot. The forward pressure really started to pay off as Kattar was just coming after Chikadze with ruthless aggression while also sticking his jab in the face in rapid-fire succession.

By the midway point in the fourth round, Chikadze was a bloody mess but he still trading shots with Kattar during every exchange. The problem is even when Chikadze was landing, Kattar was still walking through his strikes and then plodding forward with jabs and even mixing in some well timed elbows on the inside.

Kattar was absolutely ferocious with the picture perfect game plan to negate Chikadze’s best weapons and then make him pay with the kind of output on the feet that was nearly indefensible. There was no slowing down from Kattar as he kept up with the same pace from the first second of the fight until the very last.

Even with just 10 seconds remaining, Kattar was still looking for the finish as he started throwing elbows like he was chopping wood and he actually put Chikadze on the canvas just before the final horn sounded. While Chikadze should certainly be commended for his durability, Kattar made him pay in almost every exchange as he continued to pull away with each passing minute until the fight was over.

It was almost exactly one year ago when Kattar was on the wrong end of the same kind of decision when facing former UFC featherweight champion Max Holloway. This time around, Kattar showed that he’s more than capable of learning from a loss as he became the hammer and made Chikadze his nail for five consecutive rounds.

“I knew what I had,” Kattar said. “I think everyone else is learning. I know I can fight like this if I’ve got to. I’ve still got to clean this sh*t up. This is no shape for a winner to look like or be in but I’m just happy to walk away with the win.”