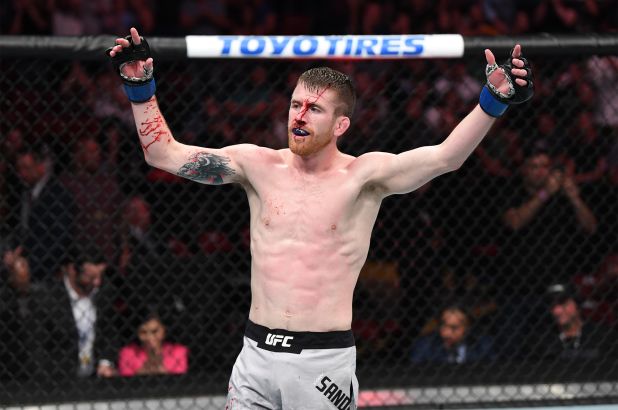 Cory Sandhagen will leave UFC Vegas 60 with a TKO victory after the ringside physician would not allow Song Yadong to continue due to a horrific cut opened on his head early in the fight that only got worse as time passed in the main event.

The gash was courtesy of an elbow delivered by Sandhagen that sliced open Song through his eyebrow as the cutman continued to furiously work on him between rounds. Sadly after the fourth round ended, Song was not only dealing with the cut but there was also significant swelling around his forehead and eye, which was a bridge too far for the doctor to allow him to continue.

The official call was a fourth-round TKO as Sandhagen gets the victory, which put an end to his two-fight losing streak.

Two of the judges actually had the fight tied at two rounds a piece with Chris Lee scoring Sandhagen up three rounds to one, although none of that matters now. While it may not have been the definitive ending he wanted, Sandhagen caused the damage that led to the stoppage, which ultimately got him the win.
Despite his prowess as a striker, Sandhagen was actually looking for takedowns early but Song continuously scrambled out of position and nearly took the back during one exchange. On the feet, Sandhagen and Song were both unloading powerful shots that could have easily led to a knockout of anything landed clean.

As the second round got started, Song seemingly gained confidence after hanging with one of the top bantamweights in the sport and that allowed him to get a little freer when throwing his combinations. That’s when Song blasted Sandhagen with a hard shot that backed off the one-time interim title challenger, which then led to another takedown attempt.

In return, Sandhagen continued to show his creativity with his attacks including the well-timed elbow strike that sliced open Song over the eyebrow. Between rounds, the cutman tended to Song as he attempted to curb the bleeding that was flowing down his face.

After the restart, Sandhagen made it a priority to really control the pace while putting constant pressure on Song as he kept him guessing with a variety of strikes and still mixing in takedown attempts. Because he had to defend the grappling, Song was a little more hesitant to commit, which allowed Sandhagen stay more active on the feet.

Sandhagen was also switching his stances effectively, shifting from conventional to southpaw, which forced Song to react with his own offense. While Song was still effective at moments, Sandhagen was just doing more damage going up top to the head and then digging to the body as well.

The continued punishment saw the gruesome cut get even worse and by the end of the fourth round, Song complained that he couldn’t even see any longer thanks to all the blood pouring into his eyes. That was enough for the doctor to prevent Song from going back out for the fifth round as Sandhagen was declared the winner in the main event.

While Sandhagen didn’t really lose much ground with his two losses, which included a controversial split decision to former champion T.J. Dillashaw, he returns to his winning ways with the fight on Saturday. Now that he’s back on track, Sandhagen hopes that he’ll get another top ranked fighter as he seeks to begin his climb towards another opportunity at UFC gold.

“Chito [Vera] and Merab [Dvalishvili] are the top two guys,” Sandhagen said when mentioning potential opponents. “I don’t want to get left out. Last time, I got left out. I had to fight down in the rankings. I want to fight someone at the top. Give me someone for Christmas.”