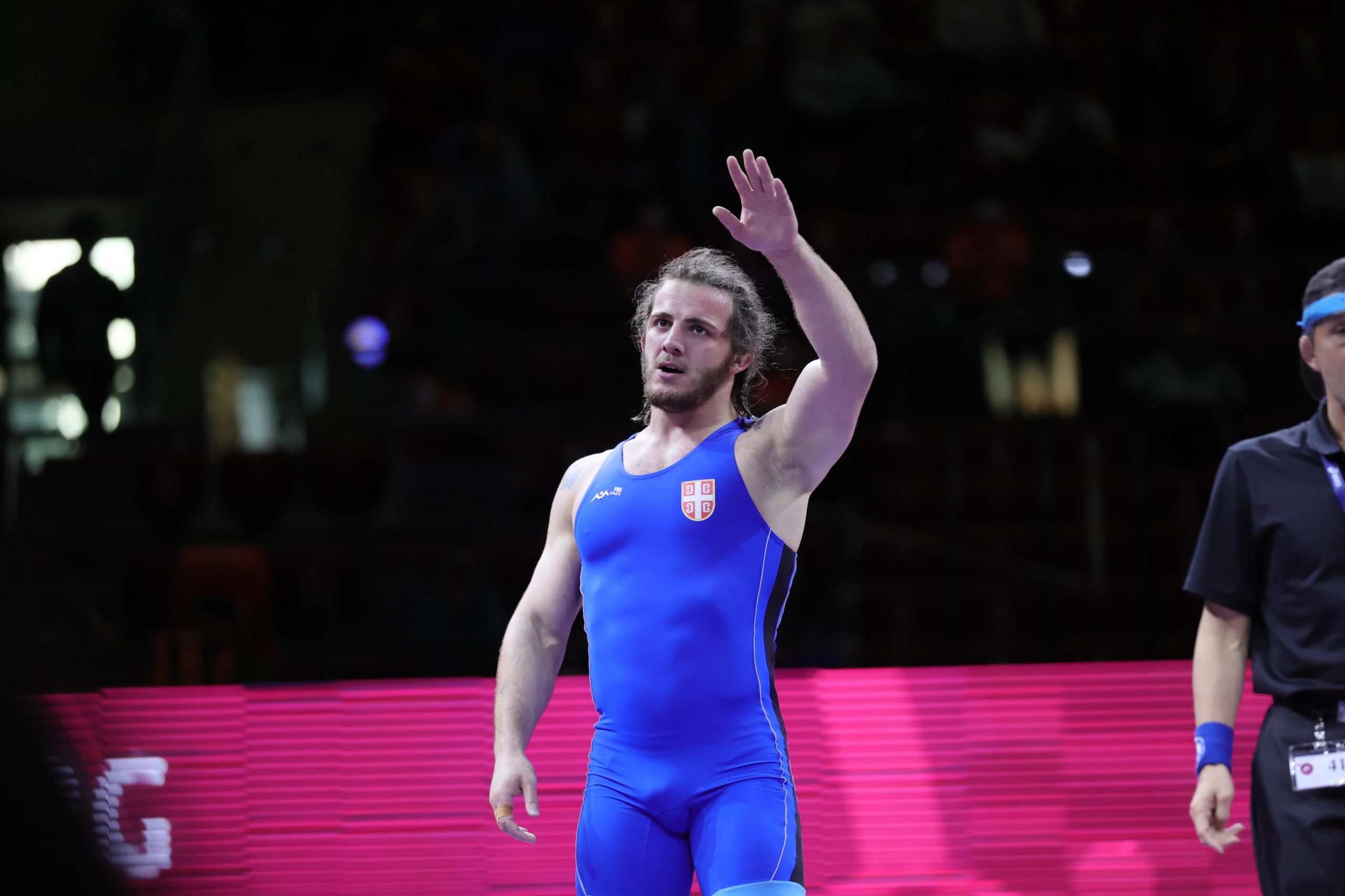 After appearing in two Olympics for his native Georgia, Zurabi DATUNASHVILI (SRB) will now get to represent his adopted country of Serbia. It took a victory over the defending Olympic champion to do it, and one that also spoiled Russia’s perfect record in qualifying.

Datunashvili did what needed to be done to forge out a 1-1 victory on criteria over Rio 2016 gold medalist Davit CHAKVETADZE (RUS) in the semifinals at 87kg, earning his country one of the 12 Greco-Roman spots allocated at the final world Olympic qualifying tournament on Saturday night in Sofia, Bulgaria.

Both wrestlers were limited to a passivity point, but Datunashvili’s came later to give him the victory as the semifinal winners in each of the six weight classes clinched tickets to Tokyo for their country.

In the last 10 seconds, the Georgian-born Chakvetadze got in on a body lock, but Datunashvili whizzered his way out of danger to give Serbia a third Greco spot at the Tokyo Games.

“It’s been hard for me,” said Datunashvili, who won his third career European championship this year and first for Serbia. “He is also a Georgian and I am, too. We wrestled in training when we were younger. This is the first time we met in a competition and I won.”

Competing for Georgia, Datunashvili finished seventh at the London 2012 Olympics, then dropped to 18th four years later in Rio. He made his debut for Serbia last year.

“I had many problems in Georgia but Serbia adopted me,” he said. “I say thanks to them.”

For Russia, Greco 87kg will be the only weight class without an entry, after the country completed the sets in freestyle and women’s wrestling on the first two days of the tournament.

In Greco, only Cuba will have the full six-member squad.

In the other 87kg semifinal, Ivan HUKLEK (CRO) stuffed a tiring Kristoffer BERG (SWE) on a back drop in the last 50 seconds for 2 points, then added a stepout for a 4-1 victory to give Croatia a second Olympic spot.

“I wrestled him in camp but this was the first time in competition,” Huklek said. “This will be my first Olympics and I am going to take a medal from Tokyo.”

Huklek added he was dedicating his triumph to his sister who died recently.

It was a good night for Armenia, which doubled its allotment of Greco places with victories by Armen MELIKYAN (ARM) at 60kg and Karen ASLANYAN (ARM) at 67kg. For both, the ability to convert in the par terre position became the difference between victory and defeat.

Melikyan coverted from the down position in the first period, then added a late takedown for a 5-2 victory over Hanjae CHUNG (KOR), one of just two Asians who appeared in the semifinals.

The other winner at 60kg was Victor CIOBANU (MDA), the 2018 world silver medalist who finally made it to the Olympics in his third try with a stunning victory by fall over Dato CHKHARTISHVILI (GEO).

Ciobanu used an arm throw to get behind, and when Chkhartishvili tried to escape by sitting out, the Moldovan sucked him back to put him on his back, then clamped down for a fall at 2:11.

“This was so hard but I kept on fighting,” Ciobanu said. “I just thought to continue wrestling and thank God I won in this manner.”

Aslanyan’s victory at 67kg came at the expense of Mamadassa SYLLA (FRA), as he was able to convert in par terre after his opponent couldn’t for a 3-1 victory.

In the other semifinal, 2018 world junior bronze medalist Parviz NASIBOV (UKR) scored a pair of four-point moves in the first period of a 10-3 victory that denied Shogo TAKAHASHI (JPN) a spot in the Olympics in his home country.

The Czech Republic became the 61st and last country to grab a ticket to Tokyo in wrestling when Artur OMAROV (CZE) secured one of the two places at 97kg.

Omarov, who finished third at at last December’s Individual World Cup, outclassed Vilius LAURINAITIS (LTU) in an 8-0 technical fall in 5:12 that he capped with his third stepout point of the match.

A transplanted Georgian came out on the losing end in the other semifinal, in which Alex SZOKE (HUN) defeated Nikoloz KAKHELASHVILI (ITA) 6-1 after scoring a pair of two-point rolls from the par terre position.

“The scoreboard shows that it was an easy match but it was not easy,” said Szoke, who finished second at the Individual World Cup. “It was hard but I was very strong mentally to win this and qualify.”

Host Bulgaria came away with an Olympic spot at 77kg — although there were no spectators at Arena Armeec Sport Hall to appreciate it — when Aik MNATSAKANIAN (BUL) defeated Fatih CENGIZ (TUR) 3-2.

Mnatsakanian, a two-time world bronze medalist at 72kg, gave up a stepout and a passivity point before getting a takedown to go ahead on criteria. He received a passivity point in the second period then protected the lead to the end.

In the other 77kg semifinal, Rafig HUSEYNOV (AZE) scored a pair of takedowns in the first period and defeated former world champion Viktor NEMES (SRB) 4-1.

“This win is so hard for me because my opponent is a famous wrestler – world and European champion,” said Huseynov, the 2020 European champion himself at 82kg and a former world silver medalist. “I am very happy to win this match.

“This is my first Olympics and I think I will be better there because after 2014 and after seven years, this is my first competition in this category.”

For the 33-year-old Huseynov, much of the battle was with the scale in dropping to the lower weight.

“I reduced 12 kgs for this competition, but for the Olympics I will be good,” he said. “I was very strong in March 2020 but then COVID happened. We had to wait. I was trying to go to 87kg, but we have strong wrestlers in that category. So I decided to drop to 77kg.”

At 130kg, 2020 European champion Alin ALEXUC CIURARIU (ROU) earned his third trip to the Olympics by putting up a solid wall of defense to shut out Rafal KRAJEWSKI (POL) 5-0.

Alexuc Ciurariu scored his first two points on passivity calls, and even though he could not convert in the par terre position, he put the match out of reach with a spin-behind takedown. An unsuccessful challenge added the final point.

“Not many people believed in me but I always believed that I would qualify,” Alexuc Ciurariu said. “The bouts were very hard but I wanted to win.”

In the final bout of the night at 130kg, Matti KUOSMANEN (FIN) defeated Mykola KUCHMII (UKR) 1-1 on criteria, with both points allocated for passivity.

Interestingly, Kuosmanen opted to remain on his feet in lieu of the par terre position. In the end, it neither helped nor harmed him, as neither wrestler could launch an effective attack.