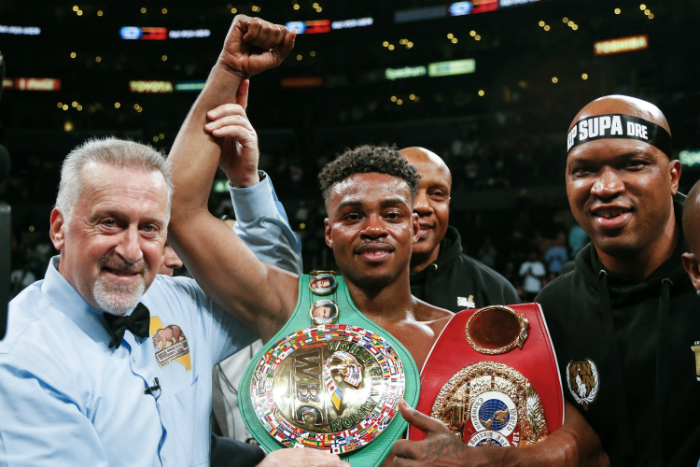 Errol Spence Jr unified the WBC, IBF, and WBA welterweight titles tonight with a 10th round stoppage win over Yordenis Ugas, and now just one name remains for an undisputed welterweight champion to be crowned: Terence Crawford.

Spence (28-0, 22 KO) came back from a sixth round scare — which was also a bonehead mistake on Spence’s part, with all due respect and something he admitted himself — to dominate Ugas (27-5, 12 KO) until the referee stepped in to stop the bout in round 10, with Ugas no longer able to see from his right eye.

It was an excellent display from Spence, who hadn’t fought in 16 months, and had to overcome a retina surgery that cost him a fight with Manny Pacquiao last year, which instead went to Ugas, who retired the Filipino legend.

Tonight, Ugas gave Spence some good looks in the early rounds and caught him focused on a lost mouthpiece in round six, smacking the American with a couple of clean shots that did hurt Spence a bit, but once he got his bearings back, he was throwing a variety of vicious punches like we’ve never really seen before in his career.

The doctor, who had taken a prior look at the eye when it was already clearly an issue, called a halt to the fight in round 10. Ugas protested, of course, but the call was the right one.

He’s always been great, but he might have been better than ever tonight, and THE fight now looms again.

“I believe in myself 100 percent, and I knew I was going to get the victory. I didn’t want a tune-up fight, I wanted someone who would bring the best out of me, and I knew Ugas was going to bring the best out of me,” Spence said after the fight. “I felt my timing was a little off (early), but I just kept working and throwing punches, and sometimes I was impatient, trying to push the pace more than I needed to.”

“I thought the ref said ‘stop,’ so I stopped, and then he hit me with three or four shots,” Spence stated about the sixth round blunder. “That was my fault, it was a rookie mistake. You’re supposed to protect yourself at all times and I didn’t do that at all,” he said with a chuckle.

Asked who he wanted next, there was no more “I’ll leave it up to Al Haymon and my team,” or, “Anyone they put in front of me, I’ll beat,” or whatever.

“I want Terence Crawford next. That’s the fight I want, that’s the fight everybody else wants. I’ve got these straps, I’m gonna go take his shit, too.”

“Everybody knows who I want next. I want Terence Crawford next. That’s the fight I want, that’s the fight everybody else wants. I’ve got these straps, I’m gonna go take his shit, too. Man down. It’s strap season, baby. Terence, I’m coming for that motherfucking belt.”