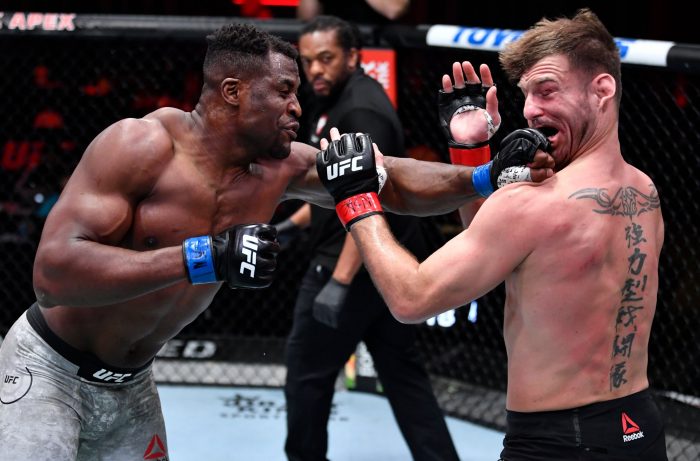 Francis Ngannou has made peace with the next step in his career, whether that’s in the UFC or elsewhere.

In other words, the UFC heavyweight champion won’t bend on his demands should he sign a new UFC contract. As he said Monday on The MMA Hour, he estimates he’s already left a lot of money on the table to get to this point.

The exact shape of Ngannou’s freedom remains somewhat of an open question, and one that is unprecedented in the promotion’s history. The 35-year-old Cameroon native is still the heavyweight champion after a gutsy decision win over Ciryl Gane at UFC 270 and believes he has fulfilled his contract to the UFC. He is willing to sign another one, but only if the promotion makes concessions on some of its longstanding business practices (even as the promotion appears to have made them less restrictive amid a long-running anti-trust case with former UFC fighters).

“The term of the contract, everything that they put into, they hold you in captivity,” Ngannou said. “You can’t do anything. You have no rights. The contract is one-sided, although you still don’t have nothing. You don’t even have health insurance, even while you’re putting your body on the line to provide to put on the show.

“That’s probably the thing that I hated most about this, how they hold all the cards, the power to just destroy you,” Ngannou added later. “As soon as you don’t say yes, they just take you down.

“There’s something wrong with me with those kind of things, that I just can’t take it.”

Ngannou said the UFC on several occasions tried to sign him to a new contract as the title unifier with Gane approached. (It’s unclear whether those negotiations took place after his manager, Marquel Martin, said the UFC had gone silent for six months after a contentious meeting.) A chance meeting between Ngannou and UFC President Dana White at a restaurant in Las Vegas was “a good talk, personal-wise,” but avoided the business at hand.

Asked what he thought about the new offers, the champ said, “not a good deal for me.”

“More money, but it didn’t carry any of the things that I have [asked for] … not really, not at all. The money was tempting, it was good, but this is not just about money. By this point, I think it’s a lot more than just money. At this moment, it’s more than money. Just money cannot fix this situation. I don’t believe that.”

At that point, he said, he had reached the end of his patience and focused instead on the challenge at hand, which turned out to be one of the most difficult ones he had ever endured.

Three weeks prior to the event, a sparring session with a less-experienced training partner resulted in a bad knee injury. A visit to a Los Angeles doctor confirmed the worst and suggested he could suffer a permanent injury if he chose to go forward. At one point, he was unclear on whether he would fight. But given what was on the table already, he decided that no matter what happened to him physically, he would accept the outcome.