Francis Ngannou: Things will be different in rematch with Stipe 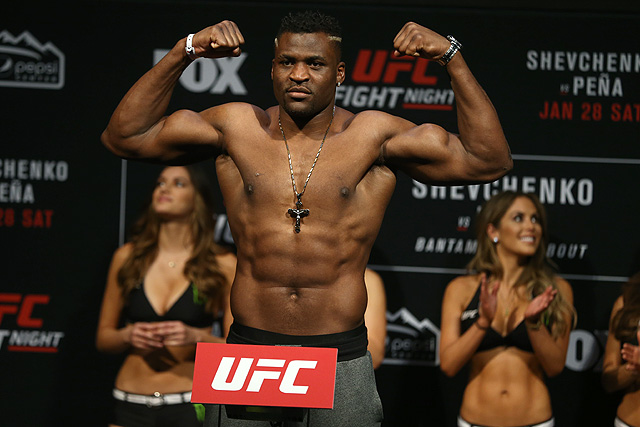 When Francis Ngannou fought for the UFC heavyweight title for the first time back in 2018, he had all the momentum in the world.

He was undefeated in the octagon with six consecutive wins, including a brutal uppercut knockout against former title contender Alistair Overeem, that helped him earn the shot against then-champion Stipe Miocic. Heading into the fight, Ngannou was a considerable favorite according to the odds makers, and all of the pre-event chatter was essentially talking about him as if he had already won the title.

Then the fight actually happened.

On that night, Ngannou spent the better part of 25 minutes on his back or stuck on his knees eating punches from Miocic, who absolutely punished him for five rounds before winning a lopsided unanimous decision. The previously invincible Ngannou finally looked human, and the disappointment washed across his face as he watched the title wrapped around Miocic’s waist.

Looking back now, Ngannou compliments Miocic on a job well done, but it’s also a struggle for him to even watch that performance as he prepares for the rematch.

“Also, I did a lot of mistakes leading up to that fight. I wasn’t even there myself. I didn’t even have emotion in that fight. I don’t know. I was just there, [a] lack of emotion. This time things will be different. I had enough time, me and my team we put everything right, and I think it’s going to be right.”

Following one more bizarre performance against Derrick Lewis that counted as his second loss in a row, Ngannou righted the ship after he began working full time with coaches out of Xtreme Couture in Las Vegas.

In his last four fights, the ferocious knockout specialist has finished two former UFC champions and two more top contenders while spending less than three total minutes in the cage with them.

More importantly, Ngannou has addressed the deficiencies that plagued him against Miocic the first time around, which included struggles stopping the takedown and a gas tank that was running bone dry by the time he reached the championship rounds.

“There’s difference in all of the aspects,” Ngannou said about his improvements. “I remember leading up to that fight, I was thinking about how it feels to fight a [five]-round fight. I had a lot of questions unanswered. I didn’t have any experience on that. Even if I lost that night, I came back, there was a part of me who wasn’t happy but satisfied for the fact that I can do it. If I make it right, I can get there.

“I don’t have that concern anymore. I had a better preparation this time and I have that experience. I put some good work on my wrestling, jiu-jitsu, even striking so I think skill wise, I have improved a lot and I still have a lot of places to move in this sport. I may be 34 years old, but I believe that I’m very young in this sport and I have a lot of places to grow.”

While becoming champion was always his end goal, Ngannou admits that getting back to another shot at the title with Miocic – the UFC record-holder for most consecutive title defenses at heavyweight – was still on top of the division really was the dream scenario.

Now, he will not only look to avenge that past loss, but exorcise those demons that haunted him after losing to Miocic the first time over three years ago.

“I always wanted to have this fight for the title against Stipe,” Ngannou said. “Because as you said, he made a point that he’s the better fighter and I want to avenge that and prove that I’m the best.”

If Ngannou is successful and he beats Miocic on Saturday night, the all time series would still be tied at one win each overall.

While former light heavyweight champion Jon Jones is currently waiting in the wings with a title shot already promised to him, UFC president Dana White admits an Ngannou victory could lead to a third fight with Miocic instead.

“We’ll see what happens,” White said. “We’ll see how this thing plays out. It would be tough to say no, [Stipe Miocic] doesn’t deserve the rematch. Of course [he deserves it]. Yeah, I don’t know.”