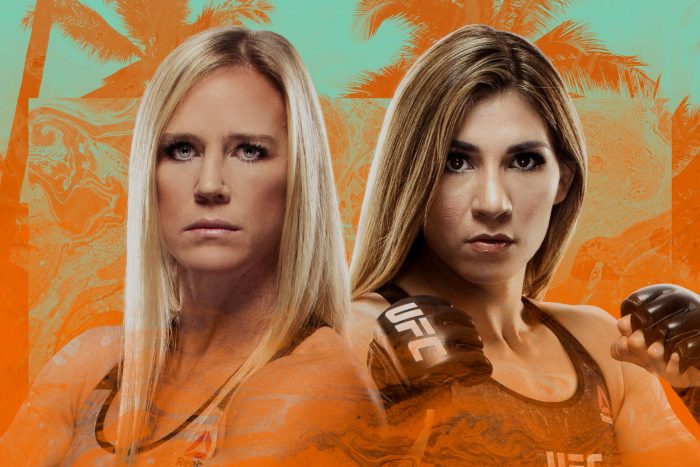 Longtime Holly Holm coach Mike Winkeljohn is certain the former UFC bantamweight champion will return before the end of the year. Finding a suitable opponent remains the bigger challenge.

According to Winkeljohn, a laundry list of top-tier opponents at 135 pounds have turned down Holm, the most recent of which was Miesha Tate, who defeated her in 2016 to capture the UFC title.

“I’m surprised,” the coach said on The MMA Hour. “She’s ranked No. 8 or something like that, Holly’s No. 2 and No. 1 doesn’t want to fight her. Why is she so worried about the belt at the moment. She has a ways to go. I’d love for Holly to fight for the title and then fight Miesha later. But Holly just wants to fight.”

Currently, Holm is on the mend from a knee injury that forced her to withdraw from a scheduled headliner against Norma Dumont at UFC Vegas 40 on Saturday in Las Vegas. The latest setback won’t require surgery, but that might not be the case in the future.

“Honestly, when Holly’s done fighting, she’s going to need a lot of work on both of knees, because she’s a workaholic, and that young lady will run every day and do what it takes and go through any pain,” Winkeljohn said. “But she’s here to get back to that title shot.”

To date, Holm has had three chances to recapture the belt, losing two opportunities to win the featherweight title – one for the inaugural belt against Germaine de Randamie and the other against then-champ Cris Cyborg – and one for the bantamweight title held by current two-division titleholder Amanda Nunes.

“The reason why Holly took the [fights] at 145 is nobody wants to fight her, honestly, behind the scenes, and some people have said it publicly,” he said. “You’re talking about, No. 1, you’re talking about Germaine. Germaine said, ‘I will never fight Holly again.’ I don’t know, she said something about her life being threatened after the last fight or something, but whatever. She doesn’t want to fight Holly; Holly scared the scrap out of her … and she’s ranked No. 1. Aspen Ladd turned her down. No. 4, I think, is Aldana – Holly smoked Aldana in Abu Dhabi.”

Next up for Nunes is a bantamweight title defense against Julianna Pena at UFC 269. Winkeljohn doesn’t see many viable options for Holm’s return other than Tate, who has promised they will meet again in the octagon before she retires.

Holm, who most recently picked up her second straight win with a dominant decision over Irene Aldana, issued a direct callout before Tate’s return to the octagon earlier this year. But Winkeljohn said it didn’t get the desired result.

“We tried,” he said. “Miesha said no. … I’m surprised. She’s ranked No. 8 or something like that, Holly’s No. 2 and No. 1 doesn’t want to fight her. Why is she so worried about the belt at the moment. She has a ways to go. I’d love for Holly to fight for the title and then fight Miesha later. But Holly just wants to fight.”