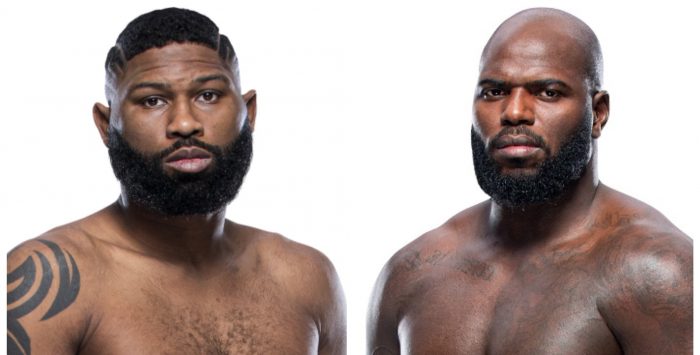 Jairzinho Rozenstruik had a feeling he would be fighting Curtis Blaydes.

After Rozenzstruik knocked out Augusto Sakai, he looked at the heavyweight division and saw Blaydes didn’t have an opponent. He began game-planning for the fight and shortly thereafter, the UFC offered him the fight which he accepted right away.

“I think it was the fight to make. It’s a fight to bring me back to the top and in the contender lineup,” Rozenstruik said on Just Scrap Radio on BJPENN.com. “I had a feeling this fight was coming… For me, it’s better if I had it as the main event and five rounds. It’s fine, three rounds, it’s going to be great.”

Once the fight was made, Jairzinho Rozenstruik began focusing more on his takedown defense in training camp. However, he says he also has been focusing on himself and improving his own skillset.

“It is a focus, but I don’t focus too much on my opponent. I focus on myself and improve my own skills,” Rozenstruik said. “I’m comfortable fighting him and I’m going to win this fight… I think he will shoot right away, that is Curtis Blaydes we know that.”

As training camp has gone by, Rozenstruik says he has been looking at the Alistair Overeem fight and looking at what he did right and wrong. He believes it is a very similar fight but after studying Blaydes, he has seen openings to land the knockout shot which he believes he will eventually get in the fight at UFC 266.

“It’s heavyweight and everybody makes mistakes. Every mistake he makes he will pay and it can be the end of the fight. The power and technique are there, any mistakes he makes will be the end of the fight,” Jairzinho Rozenstruik explained. “I’m looking for the knockout, it’s there if I have a clean shot the fight can be over… We will see what he wants to do in the first round, the most important thing is to pressure him and put him backward, he’s going to shoot anyway. I have to get the knockout. This fight will be fire from the start.”

If Rozenstruik does KO Blaydes he knows he would enter the title conversation at heavyweight. Yet, he does want to remain active and wants to fight again this year and thinks Derrick Lewis or Stipe Miocic make sense for his next fight.

“I think this fight will bring me to the top, I beat him and I take his spot. If I need one more fight for the championship, let’s go. I want a quick turnaround after this one as well,” Rozenstruik concluded.