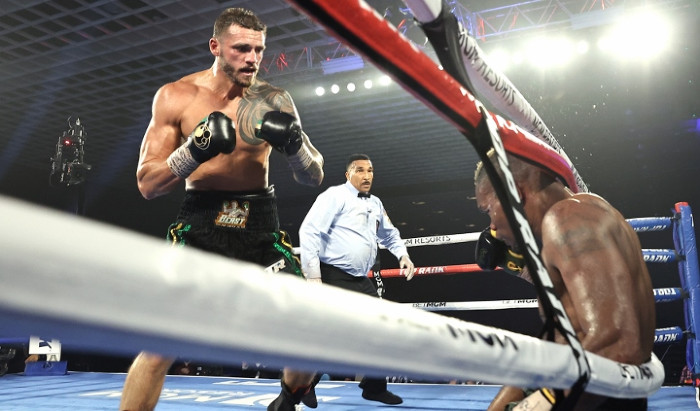 Geffrard had come in on just eight days’ notice, replacing original opponent Callum Johnson, who was ruled out after testing positive for COVID. Once a standout amateur, the 31-year-old Geffrard lost his first two pro fights in 2013 before winning his next 18, albeit never against serious competition.

Most importantly for this opportunity, Geffrard (18-3, 12 KO) was already in training — for an eight-rounder, but in training — and was willing to take the chance to get a world title shot. And he has nothing to be ashamed of here, as he came in, tried his best, and just wasn’t able to get the job done.

In other words, the fight played out very much like a world champion taking on the man ranked No. 108 in the world by BoxRec.

Smith (28-3, 22 KO) was throwing with bad intentions from the get-go, but Geffrard did his best with a high guard to pick off Smith’s power shots. It worked to a degree, though it was also difficult for Geffrard to get any of his own offense going.

Smith also did some good body work when he could, and maybe even could have done more, and he may have done some damage to Geffrard’s left shoulder by landing shots there that couldn’t get through or around the guard, as Geffrard had told trainer Kevin Cunningham that his shoulder was bothering him toward what wound up being the end of this fight.

Geffrard finally did go down early in round nine, and Cunningham told the commission to stop the fight pretty much immediately, having seen enough of what had increasingly devolved into a clear mismatch. The official time of stoppage was 37 seconds of round nine.

As he always does, the Beast is going to work 🔨 #SmithGeffrard pic.twitter.com/xGPfu1tK5g