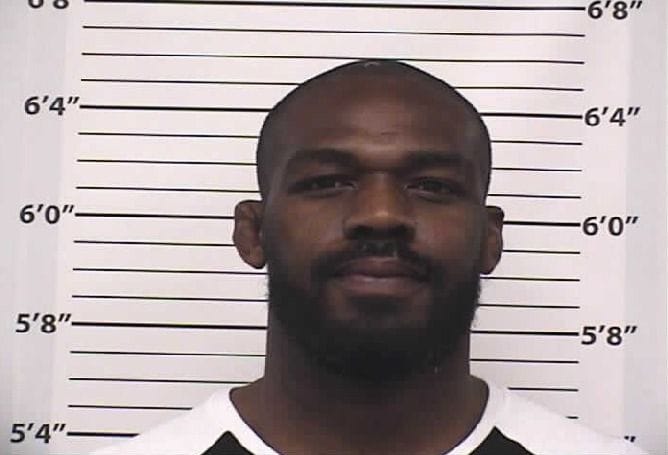 Former UFC light heavyweight champion Jon Jones is denying he struck his fiancée during an incident in Las Vegas on Sept. 24 that led to his arrest on charges of domestic violence and felony injuring or disabling a vehicle.

The 34-year-old New York native directly addressed the charges for the first time in a series of social media posts on Wednesday after his head coach Mike Winkeljohn revealed that he had been temporarily suspended from the Jackson-Wink gym in Albuquerque, N.M. following Jones’ arrest.

“I love how people are imagining the worst possible situation in their heads and making it somehow factual,” Jones wrote on Twitter. “I never hit my fiancé [sic] and our daughters were woken up after our confrontation. My daughters didn’t see or hear us arguing.

“That’s really the only thing I care to clarify. Outside of that, looking forward to moving forward without alcohol. It’s the first time in my life where I’m actually ready to quit. Glad to have the support of my fiancé [sic], family friends and fans.”

According to the police report, Jones was taken into custody after his fiancée, Jessie Moses, approached hotel security at Caesar’s Palace in Las Vegas asking for a replacement key to the room they were sharing. The security guards told police that Moses had blood on her face and clothing, and one of the couples’ children asked them to call police after the alleged altercation had occurred.

Moses later told police that he had gotten “a little bit” physical with her while adding that he allegedly “pulled my hair a little bit but he did not hit me or anything.”

Police observed a bump on her lip along with blood “around her lips, chin and all over her sweatshirt” as well as blood on the bed sheets in the hotel room.

Jones had already left the property by the time police arrived but he was picked up shortly after, which is when the veteran UFC fighter allegedly became “irate and smashed his head into the front hood of the [Las Vegas Metropolitan Police Department] patrol vehicle leaving a medium-sized dent as well as chipping of some of the paint on the vehicle.”

The damage done resulted in Jones being charged with a felony for injuring or disabling a vehicle.

Following his release on bond, Jones posted a video on his Instagram account that showed him working out with friends, adding that he planned to give up alcohol for good after this latest arrest and saying that he wanted to “turn this nightmare into the best thing to ever happen in my life.”

He then posted and later deleted a video that showed him kissing Moses.

Since his arrest, Jones had never directly addressed what happened, and he added in a separate post that ultimately he’ll be judged more by his actions than his words, especially after previous arrests including multiple DUIs and a hit-and-run accident in 2015.

“Yep I totally understand that, that’s why I’m not going to do some big PR stunt, hire a publicist,” Jones said. “I’m not gonna do anything like that. I know it’s real. I know that I’m ready. Time will take care of the rest.”