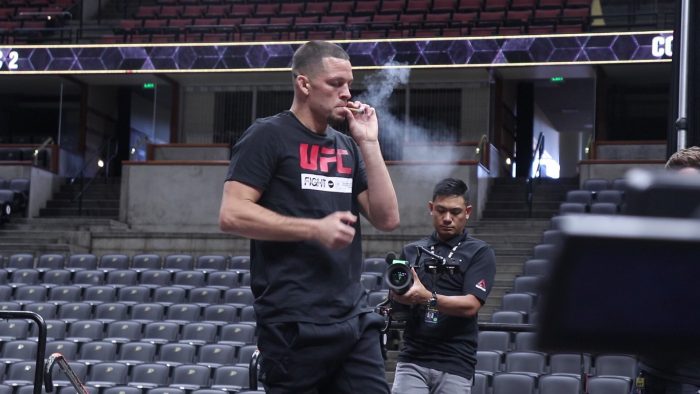 Nate Diaz and Dustin Poirier are getting tired of waiting but Dana White, it seems, is not.

Last month, Poirier lost a lightweight title bid against Charles Oliveira at UFC 269. Following his defeat, Poirier began calling for a bout against Diaz, who in turn offered to fight Poirier as soon as this month. Ultimately, the fight was not booked and, at the moment, doesn’t seem close to being made. This appears to be frustrating both men as yesterday the two took to social media to renew their calls for the fight, with Diaz blaming the hold up on the UFC.

Poirier and Diaz were originally scheduled to face each other back in 2018 but the bout fell through after Poirier suffered an injury during training camp. The two men’s roads diverged after that but now seems like the perfect time to finally re-book it. Dana White suggested as much following Poirier’s defeat to Oliveira and when asked about Diaz’s comments yesterday, White said it’s something the UFC is still interested in.

“Of course we’re interested,” White told ESPN. “This is what we do, we make fights every weekend. What happens is guys just want to jump out of nowhere and say, ‘I want to do this, I want to do that.’ We have fights booked all the way up until May 2 right now. Everything is in place, everything is done, so obviously Nate Diaz will get a fight. I say this all the time, Ive been saying it for 20 years: we are contracted to fight guys three times a year. They’ve got to get fights. He’ll get a fight.”

Diaz will certainly be offered a fight but whether that fight will be against Poirier remains to be seen. Diaz is currently on the final fight of his current contract and many have suggested that the delay in booking Diaz a bout is the UFC’s desire to do the trilogy fight between Diaz and Conor McGregor to close out Diaz’s contract. McGregor is not anticipated to be back until this summer as he is still rehabbing his broken leg, and given that, White was not willing to speculate on that possible booking. Though he did admit it was possible.

“It could be, but it’s gonna depend,” White said. “I think Conor will be back this summer but I don’t know if Conor will be back this summer. That’s all gonna depend on how Conor’s leg heals and a million other things that could happen between now and summer, so to speculate is even stupid. I just stopped doing that. When Conor McGregor calls me and says, ‘I’m ready to go full bore and start training 100 percent,’ then we start talking about what’s possible for Conor.”

Diaz and McGregor first fought at UFC 202 in 2016, with Diaz pulling off a stunning upset victory that launched him into superstardom. The two rematched a few months later at UFC 202 with McGregor winning a majority decision in one of the best fights of the year. Since then, the rumored trilogy fight between the two men has remained on top of the minds of many MMA fans, and with McGregor currently on a two-fight losing skid and Diaz rumored to be eyeing a boxing match with Jake Paul once his UFC contract is completed, it makes sense that the UFC would want to close the book on that trilogy before it’s too late.