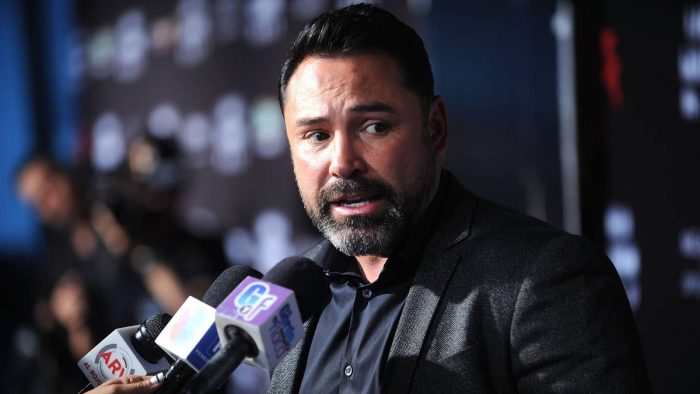 With Oscar De La Hoya set to kinda return to boxing with a Sept. 11 exhibition against former UFC champ Vitor Belfort, the 48-year-old former champ-turned-promoter laid out a much bigger plan during today’s DAZN card in Texas, telling Chris Mannix that the ultimate goal is to rematch Floyd Mayweather.

“I want to make the biggest comeback in boxing history,” De La Hoya said. “I want to get two of these fights down under my belt, and get the timing ready and everything, and then my third one, I want to call out Floyd Mayweather.”

When Mannix pointed out that Mayweather, 44, doesn’t seem that interested in a boxing return after his exhibition with Logan Paul — which did not receive rave reviews in any way — De La Hoya said he thinks Mayweather will find the desire to get in there, and also went on about his jab again.

“I think Floyd after that exhibition he did with with Logan Paul, I think Floyd has — I think he’s feeling like he has to prove something once again inside the boxing ring. So look, if I come out OK, my body feels great — I’m telling you, may jab feels faster than ever. I think it’s the 15 years I didn’t use it. If I feel good these next two fights that I have, I’m going to call out Floyd.”

Mayweather, of course, beat De La Hoya in 2007, which was 14 years ago if you need it spelled out, in what was generally considered one of the more competitive fights of Mayweather’s career. It was also a huge money fight, the biggest PPV fight ever at the time, and a rematch was planned for 2008.

It didn’t happen. Instead, Mayweather announced one of his many retirements that didn’t last, and De La Hoya fought Manny Pacquiao, which wound up the fight that put the “Golden Boy” into retirement, a one-sided beating where Oscar looked old and feeble trying to fight at 147 lbs for the first time in years.

There would be money in a Mayweather-De La Hoya “rematch,” whether an actual fight — unlikely — or an exhibition, at least so long as Oscar doesn’t blow that goodwill with poor performances in the potential lead-up.