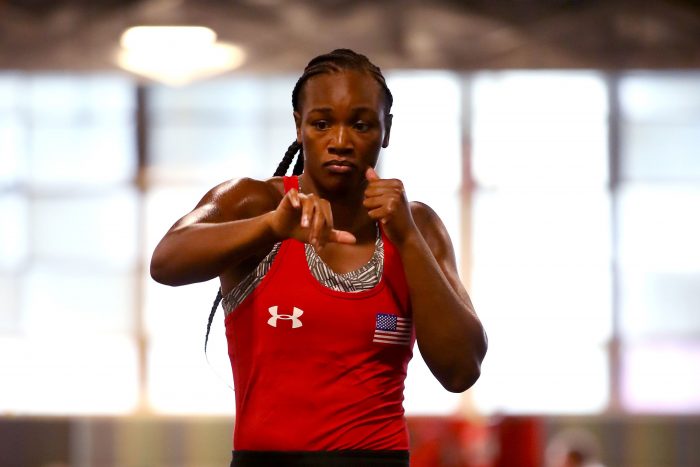 Likely down two rounds, boxing champ Claressa Shields found her sprawl in the final frame and turned the tables on Brittney Elkin.

A powerful right hand had Elkin shooting for a takedown after dominating the first two rounds. But when Shields stopped the shot and held top position, she unloaded a series of punches that led to a TKO stoppage at the 1:44 mark of the third.

“I feel like I am dreaming,” Shields said afterward. “This is crazy.”

It was a triumphant comeback for Shields, whose inexperience on the ground was apparent in transitions as she missed opportunities to counter Elkin’s grappling. A seven-month intro to MMA courtesy of famed coaches Greg Jackson and Mike Winkeljohn was no match for her opponent’s years of experience. She spent much of the first two rounds on her back, mounted, as Elkins peppered her with short shots.

Once she got on top, though, Shields powerful fists paid big dividends.

“She had me on the ground, but she never hurt me,” Shields said. “When that third round came, I said to myself, I’m going to dog her. … I am not going to lose this fight.”

The end may have been written at the end of the second round when Shields managed to escape an armbar from mount and get to Elkin’s back. There, she landed her first batch of heavy punches, and Elkin, a jiu-jitsu brown belt, suddenly appeared worse for the wear at the start of the third.

Shields said she’d never considered losing a boxing match in her life. But at the end of the first and second round, she wasn’t so sure. But she took her coach’s advice and wouldn’t allow herself to be taken down.

“I just had a never quit attitude every round,” she said. “Never give up, that’s what I told myself.”