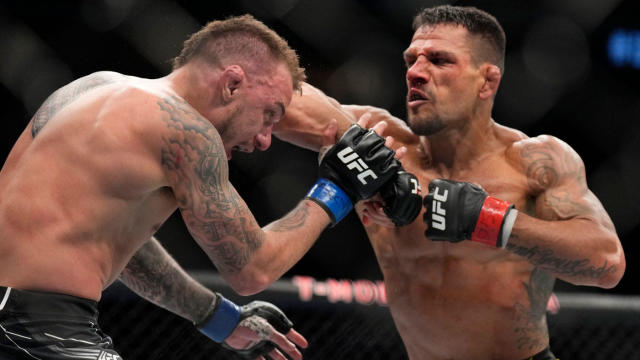 It wasn’t the fight he expected but Rafael Dos Anjos was victorious nonetheless as he brutalized Renato Moicano over five rounds in the UFC 272 co-main event.

Originally scheduled to face Rafael Fiziev on Saturday night, Dos Anjos drew Moicano on just five days’ notice but apparently he decided to take out his frustrations on his late notice replacement. Dos Anjos was relentless with his ground attacks as he opened several cuts on Moicano and left him covered in blood and bruises when the fight came to an end.

The scorecards read 49-45, 49-44 and 50-44 as Dos Anjos secured the win for his second straight victory since returning to the lightweight division.

“Thank you to Moicano to take the fight on short notice,” Dos Anjos said. “A lot of people ran away but Moicano took the fight. It was very impressive.

“[It] was hard for him but it was hard for me as well. I was training to fight Fiziev and he’s a Muay Thai fighter.”

It appeared after taking the fight this past Tuesday that Moicano was looking to get out to a fast start as he was on the attack early and often but Dos Anjos resisted by turning to his grappling to slow the action down. Once Dos Anjos snatched a takedown near the cage, the former lightweight champion was punishing on top as he set up punches and elbows with Moicano stuck underneath him.

After spending most of the first round on his back, Moicano showed much better defense at the start of the second but the relentless attack from Dos Anjos eventually brought him back to the ground again. It was a methodical attack from Dos Anjos as he continuously set up his shots, measuring elbows and then looking to pass through Moicano’s defense.

Following a dominant start to the fight, Dos Anjos turned to his striking to then batter Moicano on the feet and he was dishing out some powerful punches in the exchanges. Dos Anjos then uncorked a beautiful head kick that blasted Moicano and sent him down to the ground as it appeared the fight might be over.
To his credit, Moicano was somehow able to survive the knockdown but Dos Anjos did not slow down as he continued to pummel him with strikes on the canvas. After the horn sounded to end the third round, Moicano went back to his corner with a cut over his left eye and he walked back out with tremendous swelling in the same exact place.

While Moicano tried his best to change the momentum, Dos Anjos just continued to plant him on the ground where he would brutalize him even more. By the time the fourth round ended, Moicano was a bloody mess and it appeared the fight could be stopped at any moment.

Despite every indication looking like Moicano shouldn’t be allowed to continue, he still came out firing with one last surge in an attempt to pull off possibly the craziest comeback in MMA history. Moicano did manage to connect with a few strikes in the final exchange but it was obviously too little, too late as Dos Anjos cruised to victory after five grueling rounds.

Rather than calling out another top-ranked lightweight afterwards, Dos Anjos decided to take aim at the UFC 272 main event, although it seems more likely that he’ll be sticking around at 155 pounds in the foreseeable future.

“I’m ready,” Dos Anjos said. “I wish [Jorge] Masvidal wins [over Colby Covington] and I get to fight him for the ‘BMF’ belt.”