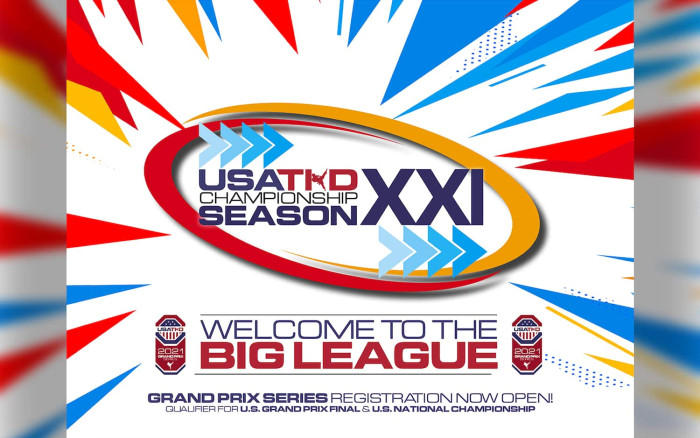 June will see a major moment for Taekwondo in the United States, as the inaugural U.S. Grand Prix Series kicks off the first ever USA Championship Season for the sport – a new event concept, and a further step in the professionalizing of Taekwondo in America.

This high quality series of events will see athletes of all ages and all belts competing in all disciplines to qualify for two other massive competitions – the one and only U.S. National Taekwondo Championships, being held this year in the stunning surroundings of the Alamodome in San Antonio (all athletes who compete in the Grand Prix Series are eligible to move on to Nationals), and for the medalists in the Grand Prix Series, in addition to qualifying for Nationals, they also earn the exciting opportunity to move on to the Post Season and compete in another first – the U.S. Grand Prix Final!

We could not be more excited about the Championship Season – and while for 2021 it has been shortened due to the pandemic, this is the first bold step forward on a new dawn for the sport in this country. Each year the Championship Season will follow the same structure – off season, pre-season, regular season and, for the best performing athletes, a glittering post season. This competition regimen will allow both USATKD and participants to plan much sooner and much more thoroughly, enabling competitors to rest and recover and peak and perform like the true athletes they are.

All Grand Prix Series events are open to everyone – no membership required – but be sure to check out the benefits for members including reduced pricing, full year sport accident secondary medical insurance and, new for 2021, the ability to skip registration and go straight to weigh in! Register early and you will shortly receive an email inviting you to sign up for your weigh in time – the earlier you register, the more chance your preferred slot will still be available, as they are limited and allocated on a first come, first served basis – so register today and make sure your competition prep is completely within your control!

Registration is open NOW for all three Grand Prix Series events – East, West & Central – please ensure the information in your Sport:80 athlete profile is correct, particularly your belt information and, if competing in World Class divisions which are part of a National Team Qualification Pathway, your citizenship documentation is present and correct.

Registration for the 2021 U.S. National Championships will open to all registered Grand Prix Series competitors shortly.