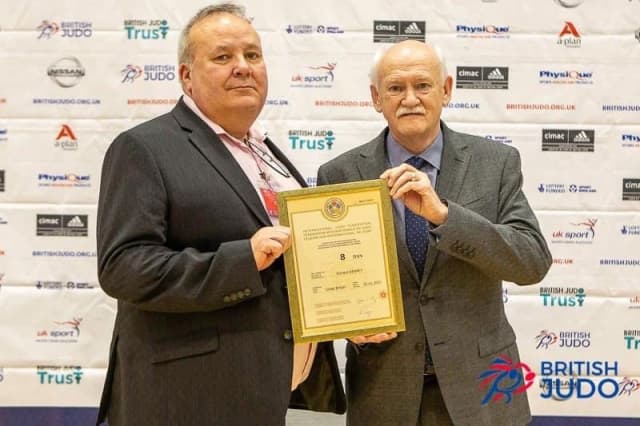 The President of Commonwealth Judo, Richard Kenney, was recently promoted to the grade of 8th dan by Ronnie Saez, Chair of the British Judo Association. This is a good opportunity to highlight the career of a judo servant, one who dedicated his life to the sport.

Indeed, Rick Kenney has been involved in the sport of judo for many years now, close to 60 years in all, working tirelessly and passionately for his sport at international, UK, Scottish and local level. He has done this for a love of the sport and to try to make a difference for those who take part.

Rick has run judo clubs across Scotland, including Motherwell YMCA, Blantyre and Edinburgh Meadowbank, since the 1970s and has been a coach, secretary, club chair, referee and often simply a general person who gets things done and makes an impact in all areas.

As a result of his work, the numbers of participating judoka increased. The Blantyre Sports Centre for instance, established in 1982, became the main focus for the national squad to train at for many years and was also one of the first to welcome children with a disability to judo.

Rick is one of JudoScotland’s longest serving Senior Examiners and he has graded many people to black belt standard in recent decades. He has competed for the UK and Scotland in both judo and wrestling. He was also the British Judo team manager at World and European championships in the early 1980s and was Vice Chair of the British Judo Association from 1997 to 2004.

Within JudoScotland he occupied several key positions since becoming a member in 1963, including an Executive Committee role in 1976, accepting the Vice Chair position in 1989 and the JudoScotland Chair in 1994. During his time as Chair, he was a tenacious and persuasive advocate for his sport and he achieved the following:

• Judo becoming a core sport at the Scottish Institute of Sport

• The rebranding of the governing body as JudoScotland

• Setting up the National Judo Academy at Ratho

At an international level, back in 1986 he was involved in the discussions resulting in the establishing of the Commonwealth Judo Association that then led to judo being included in the 1990 Commonwealth Games in Auckland, New Zealand. There  he was the coach and Scotland won its first judo gold medal with Loretta Cusack-Doyle.

Richard has been an enthusiastic member of the CJA Executive Committee since that time and after a number of years as Vice President was elected as the President in 2013. He has spread an enthusiasm for judo across the Commonwealth and in recent years ensured the Commonwealth Championships were taken to Africa, Asia, North America and Oceania.

Rick was also Vice Chair of the Commonwealth Games Council for Scotland for 8 years and was a core member of the successful Glasgow 2014 Bid Team.

Beyond judo, Rick has been a tireless supporter of community sport as well. It is therefore no surprise that after all those years dedicated to the development of sport, especially judo, Rick Kenney received his 8th dan and there is no doubt that he will continue to serve his sport and others to benefit society.