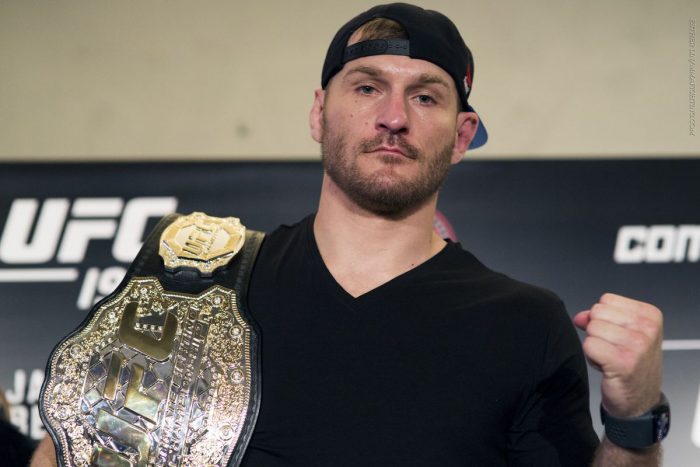 For anyone who hasn’t been paying attention, the UFC heavyweight division is a bit of a mess right now. And that fact isn’t lost on one of its main players, Stipe Miocic.

A record-breaking former UFC heavyweight champion, Miocic has been an observer to the chaos that has unfolded since he lost his belt in a March rematch with Francis Ngannou. Before UFC 260, everything seemed so clear. UFC President Dana White spent the lead-up to Ngannou vs. Miocic 2 promising that the winner would face former light heavyweight champion Jon Jones in a blockbuster superfight. But that didn’t happen. Instead, Jones has remained on the sidelines, and the UFC made the polarizing decision of introducing an interim title to the division mere months after Ngannou knocked out Miocic to claim gold.

That interim belt now sits in the hands of Ciryl Gane following his third-round stoppage of Derrick Lewis at UFC 265. And for Miocic, a decorated two-time champion who was drawing plaudits as the greatest heavyweight in UFC history prior to his loss, the expectations of Ngannou vs. Gane next with Jones potentially waiting in the wings in 2022 has left Miocic as somewhat of an odd man out of heavyweight’s current equation.

“Hey, nothing new,” Miocic said. “It feels like it’s like that all the time with me. Right now it’s time for us to sit down with Dana and figure this all out and try to find the right path.”

Miocic said he is tentatively scheduled to sit down with White in September, ultimately with the hope of plotting out his move. He also hasn’t concerned himself with the hysteria over the division’s interim title, other than being annoyed at not being given the same opportunity as Gane and Lewis despite all he accomplished during his two UFC title reigns.

“That was the UFC’s decision,” Miocic said. “It’s not mine. I wish I would’ve gotten a call offering me the fight. I never got one, but it is what it is. I probably wouldn’t be able to take it anyway, but it would’ve been nice just to be offered it. But there’s just so much going on. There’s a lot of moving parts, I guess you would say. I’m going to sit down with Dana here in September and kind of figure out what’s the next gameplan and what we’re going to do.”

Miocic is a busy man these days. The 39-year-old fighter and his wife are on high alert with the birth of their second child expected to come imminently. Miocic is also slated to play a part in the fight week festivities for Jake Paul vs. Tyron Woodley in Cleveland, and was at Revolution Fight and Fitness on Wednesday to help promote a program between Modelo and the UFC that has the two partners renovating gyms across the country.

Miocic said he isn’t ready to make any declarations about his next step until meeting with White, but that his focus right now is on two primary goals.

“Honestly, getting the title back,” he said. “But definitely [I want] to get that fight with Francis. Hopefully he keeps it and hopefully we fight again and I get back what’s mine.”

Miocic couldn’t help but laugh at how conversation has changed since his loss to Ngannou. Since UFC 260, it seems as if the whole world is counting him out of winning a potential trilogy fight, even though he already beat Ngannou once in 2018. And for Miocic, all of the doubt he’s been hearing in the months since is really just par for the course.

“It happens all the time,” he said. “I mean, it’s pretty much my [entire career]. That’s fine with me. Maybe because I’m too nice. I don’t know. Maybe it’s because I don’t talk sh*t. I don’t know if I talk enough smack or I’m not a trash-talker, I don’t know. Who knows?”

He called the matchup between Ngannou and Gane “a good fight” and credited Gane for having an unusual skill set for heavyweight — “He doesn’t stop moving,” Miocic said, “he does a great job” — but ultimately Miocic admitted that he hopes Ngannou wins so he can get his shot at revenge. And if that shot does come, Miocic already sees plenty of adjustments he can make to ensure the rubber match doesn’t look like a repeat of UFC 260.

Miocic said he isn’t willing to commit one way or another in regards to taking another fight over waiting for a title shot to arrive in his inbox, but the fact still remains that his window may be limited. Miocic will turn 40 years old next year, and it’s anyone’s best guess how long the current saga unfolding at heavyweight will take to play out. But right now, retirement isn’t even close to the forefront of Miocic’s mind. His focus is singular.

“I just want to get my belt back,” Miocic said. “That’s all I’ve really thought about. I haven’t really worried about retirement. I’m having fun, and as long as my body feels good and I’m having fun, we’ll keep going.”