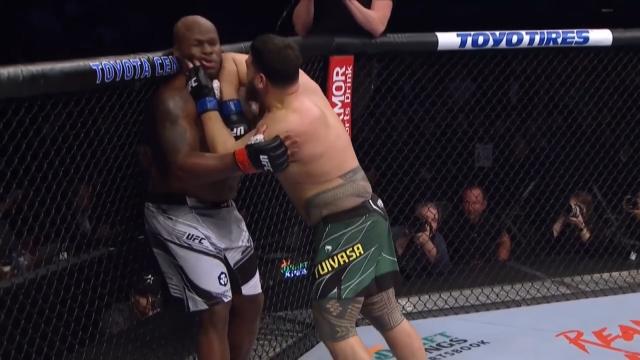 No one in MMA may be flying higher than Tai Tuivasa right now — and “Bam Bam” is hoping to keep things going with a bout against a former UFC heavyweight champion.

Tuivasa put on the best performance of his career in February when he knocked out Derrick Lewis in the co-main event of UFC 271. It was Tuivasa’s fifth straight win, and it rocketed him up to No. 4 in MMA Fighting’s heavyweight rankings. And now the king of the shoey is hoping he’ll get to continue his climb by taking on former two-time champion Stipe Miocic.

“He’s the best heavyweight in the world, I don’t see why not. … I think [Ciryl] Gane and the rest of the boys will be around for a little bit, as in I’ll probably see them, and I reckon Stipe Miocic probably doesn’t have too many fights left. That’s someone I’d like to say I fought before he goes. For example, JDS [Junior dos Santos], he beat my ass but at least I can say I fought him. That’s what I like about fighting. To say at least I had a crack, or I beat him. Sometimes I’ve lost and sometimes I’ve won — that’s another fight I reckon I’d like to challenge myself [with].”

But, of course, what a fighter wants and what a fighter gets are not always the same thing. With Ngannou sidelined for the rest of the year — and potentially done with the UFC for good — rumors have circulated about a potential interim title fight between Miocic and Jones. If that’s the case, Tuivasa would be left with few options other than fighting someone behind him, and that’s less appealing to the suddenly surging Aussie.