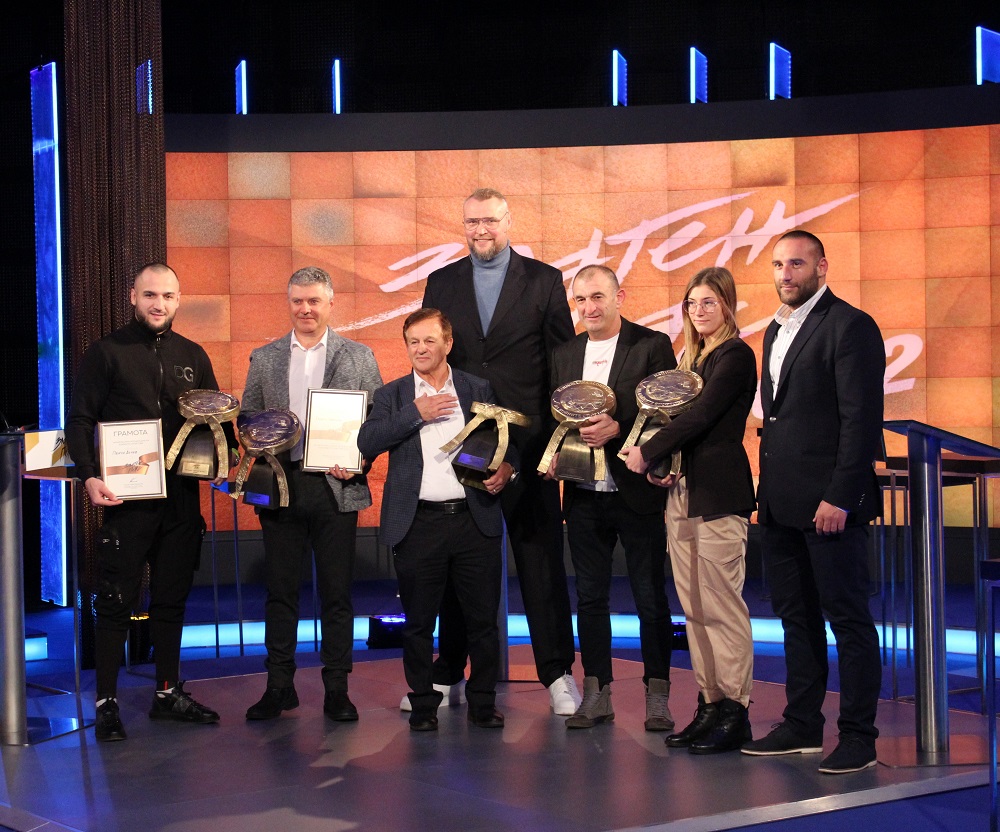 The exciting National Combat Sports Association of Bulgaria (NABS) awards ceremony was held in a TV format on December 19th and was broadcasted live in Bulgaria by the national multi-thematic television Bulgaria ON AIR, which is the official media partner of the event. The sophisticated event “Golden Belt” 2022 annual awards was organized for the fifth year in a row.

Over 40 000 athletes, who are members of the Association’s 12 federations, competed for the prestigious awards. The K-1 legend and four-time K-1 World Grand Prix Champion Semmy Schilt presented the awards to the winners during the ceremony.

In the category “Best Athlete – Male” Pencho Dochev from the Bulgarian Sumo Federation took the award. This year he won the European title in the lightweight category up to 85 kg. In recent years, Dochev also won a bronze medal at the World Championships in 2019, and earlier this year he ranked Bulgaria in 4th place at the World non-Olympic Games in Birmingham, USA.

The second award for the best female athlete of the year was given to Iya Kostova from Bulgarian Karate Kyokushin Federation. This year, the national athlete won a gold medal for Bulgaria at the Kyokushin Karate World Championship in Valencia. She is also a KWU European Championships medalist and multiple Republican Champion.

The prize for the best coach was won by Vasil Sokolov from the Bulgarian Sambo Federation, who is the senior coach of the national Sambo team. He is a two-time world champion, European champion, and multiple medalist of the World and European championships.

Georgi Tsvetkov from the Bulgarian Armwrestling Federation was awarded the “Golden Belt” special award in the “Finest Victory” category. He is a two-time World champion and a two-time European heavyweight champion.

Stoyan Saladinov from the Bulgarian Sambo Federation was awarded the last prestigious “Golden Belt” award for respect to combat sports and martial arts traditions. He is a multiple champion in wrestling, sambo, judo, and karate. For more than 20 years, Saladinov trained the berets in the specialized unit to fight organized crime.

Each of the federations in the National Combat Sports Association also had its own special individual awards for the most deserving athletes and coaches in the past year. Deserving journalists from the sports portal Gol.bg also received a special award for their contribution to the promotion of combat sports.

The sole purpose of the awards is to recognize the achievements of the combat sports athletes and coaches and all those who are deeply involved with the development of combat sports in Bulgaria. Bulgaria’s National Association of Combat Sports is the only martial arts organization that is accredited by the Ministry of Youth and Sports in Bulgaria. It was established back in 2015. 476 clubs and over 40 000 athletes from Bulgaria are participating in the Association. Kickboxing and Muay Thai, Kyokushin Karate, Taekwondo ITF, Jiu-Jitsu, Sambo, Kendo, Kudo, Wushu, Karate Shotokan, Sumo, Aikido, and Arm Wrestling headquarters are all part of the association.