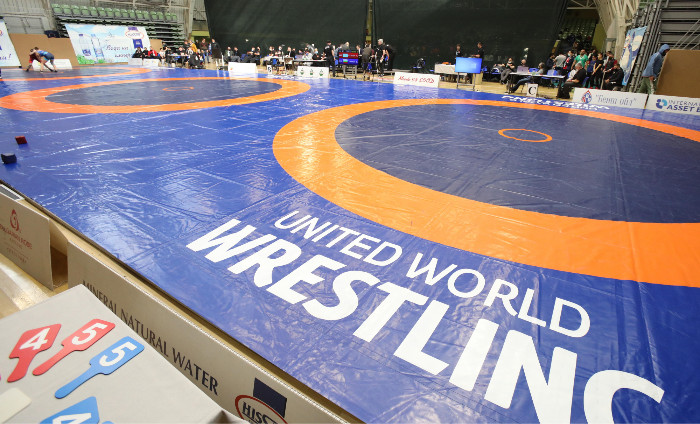 When Diego and Giorgi CHKHIKVADZE (GEO) returned from the Junior World Championships in Ufa, Russia last year, they were upset. The two had to be satisfied with silver medals after losing their finals.

On their way back to Georgia, they promised each other that in the next competition, both are going to take home a gold.

Both Chkhikvadze’s kept their promise they won the gold medals at 67kg and 72kg at the U23 European Championships in Plovdiv, Bulgaria.

“We have gold together at Junior Euros,” Diego said. “We have silver medals in Ufa but we did not want to win silver here.”

Georgia had five finalists in five weight classes Wednesday and three ascended to the top of the podium. Azerbaijan and Netherlands managed to win a gold each as Greco-Roman came to an end at the first continental championships of the year.

“When we had the camp in Tiblisi before this tournament, we prepared really hard,” Sergo NINUA, coach of the Georgian team, said. “We expected more gold medals but even four is good for now.”

The four gold along with three silver and bronze helped their team win the team title with 183 points. Turkey finished second with 156 points while Azerbaijan was third with 102 points.

But the highlight of the day for Georgia was the two Chkhikvadzes winning back-to-back gold medals.

Diego, a Batumi native, began the trend as he eked out a tough win against Kadir KAMAL (TUR), 3-2. He took the lead when Kamal was called passive and extended it with a body lock throw for two points.

In the second period, Kamal got the first point but he could not get a point when he stopped halfway in a gut-wrench. With the score still 3-1 in Diego’s favor, Kamal managed to get a stepout from 2-on-1 after Turkey won the challenge.

Kamal tried his best to score in the final 24 seconds but it remained 3-2 as Diego added a U23 Euro title to his two junior Euro titles.

“I had an anke injury,” Chkhikvadze said. “I was not sure of coming here but I wanted to win the gold and it was a tough final but feels good to win it.”

Giorgi followed him by winning the second gold of the night for his country. Incidentally, he also beat a Turkey wrestler in Abdullah TOPRAK (TUR).

“The final was one crazy bout because we both wanted to win,” the 21-year-old said. “It was more of a brawl because in wrestling you don’t want to give anything to your opponent.”

Wrestling at 72kg, Toprak was called passive in the first period and Giorgi managed to get a throw from par terre to lead 3-0. But a 2-on-1 position resulted in Toprak coming out on top and cutting the lead to just one point, 3-2.

But Giorgi led by three points, 5-2, after Toprak received his second warning for an eye poke. An aggressive open-hand attack resulted in another warning and two points against Toprak.

But after the break, Giorgi was called passive and Toprak scored from a gut wrench to trail 7-5 with 1:52 remaining on the clock.

The final two minutes were filled with several warnings for both wrestlers from the referee but the Georgian managed to hong on for the win.

“My weight had 20 participants including the U23 world champion [Idris BAEV (GER)],” he said. “That is why this gold is a little special.”

Giorgi, who began wrestling when was six years old, had upset Baev Tuesday in the quarterfinal with a 9-3 score.

But as the two posed for photos with kids in the Kolodrom Plovdiv stadium, they did that with a warning that they are not brothers.

“Of course, people confuse us for brothers,” Giorgi said. “When people click photos with us, they tag us wrongly on social media. But we don’t mind it because we are best friends and it’s okay if someone calls us brothers.”