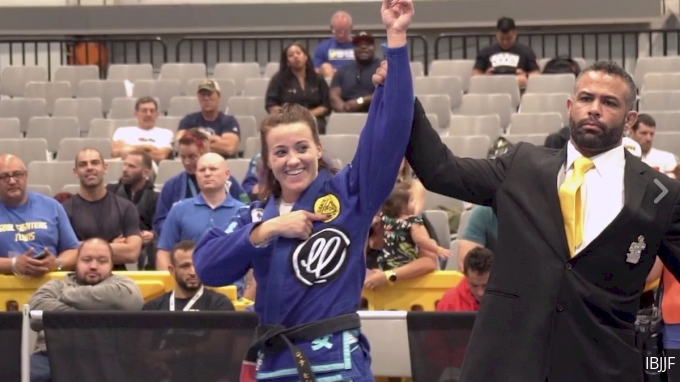 r the past 14 years, we have witnessed the growth of Jena Bishop in jiu-jitsu, a path that led the Missouri native to the top of grappling’s pyramid of success. After earning a world title as a brown belt back in 2013, Jena continued her winning ways at the black belt level conquering a World No-Gi Championship gold medal (2017), World Masters title (also in 2017), and the North American East-Coast ADCC Trials (2019).

Known for her aggressive and scrappy style, Bishop always showed potential for a transition into cage-fighting, a thought that also crossed Jena’s thoughts in the past: “I’ve always wanted to try MMA, but never wanted to take time away from training BJJ to really focus on fighting,” Bishop told BJJ Heroes on February 2021.

Unfortunately, for grappling and the people who live off it, the sport has been at a stand-still since the SARS-CoV-2 outbreak early last year. A Glass-half-full kind of person, Jena took the break to invest in expanding her horizons. “When all jiu-jitsu events stopped because of COVID19 it gave me the time to sit back and evaluate what I was doing and what I really wanted going forward. I was training with Cat Zingano [former UFC title contender] to help her get ready for a fight in Bellator and she trusted me enough to corner her in that fight. Talking with her gave me the push I needed to jump into MMA.”

Over the years we have seen our fair share of top-tier grapplers advertise their entry in the MMA world without taking the necessary steps to truly aim for success in their new proposed endeavor, this is not the case here. Following the “there is no try” mantra once held by a wise old combat master, Bishop spared no efforts in her adaptation, seeking the best in the business – “I’m training striking with Adam Pryde, boxing with Jose Cital, and wrestling with Justin Flores.” To top off her training Jena has aligned herself with venerable sparring partners such as the aforementioned Cat Zingano and UFC’s Angela Hill, which Bishop has mentioned as being very encouraging in her transition.

Another interesting aspect of Jena’s transition is her commitment to these new goals. Although still training jiu-jitsu daily with Johnny Faria at Alliance San Diego, Bishop has no intention of returning to the pro-grappling scene anytime soon, “I thought at first that I would just test the waters but I’m having fun transitioning into this sport. It’s fun to be learning new skills and pushing myself in new ways. I’m fully committed to MMA and seeing how far I can go in the sport“. Cementing that claim, Bishop has recently signed a 4 fight deal with Legacy Fighting Alliance (LFA) led by the famous Brazilian promoter, Ed Soares.

LFA has been a successful feeder for the UFC and Bellator in the past, having the advantage of being streamed on a large platform such as UFC Fight Pass. With all the pieces falling into place in a timely manner, we should not wait much longer to see Bishop’s debut – “They are trying to get me a fight in March or April” said Jena.

With Lucas Barbosa and Marcus Almeida announcing their plans to test the MMA waters in 2021, Bishop becomes the third top tier black belt to set her goals for this year, and will likely hit the ring sooner, rather than later. More news on her exciting debut soon, stay tuned.