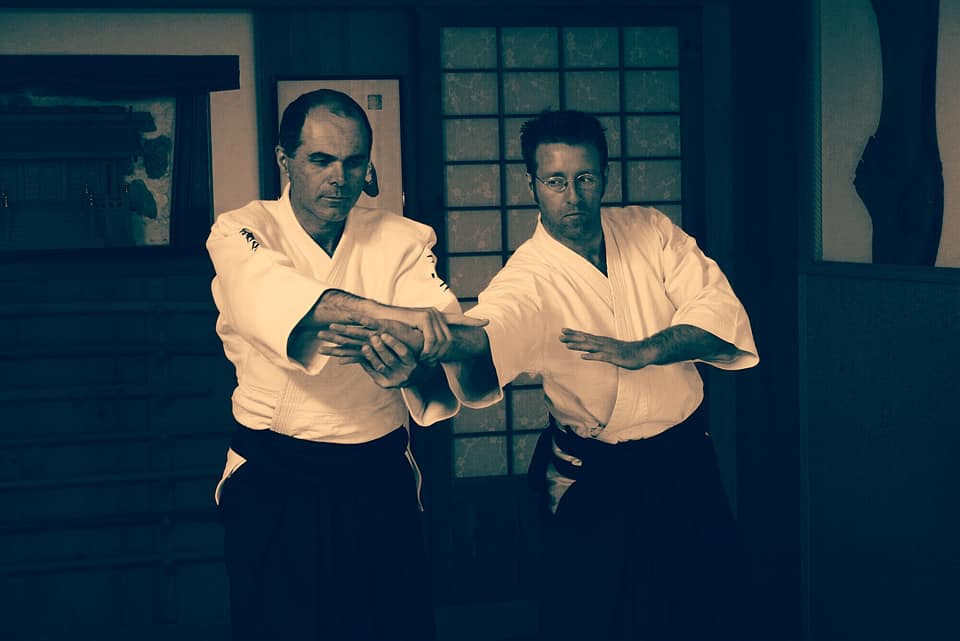 Gyakuhanmi katatedori is when the attacker grabs your wrist, either left hand on your right or right hand on your left. It is the attack form most commonly used in shihonage practice, because the entry into the throw is the least complicated here.

In omote, you step to the side to get out of the line of attack, the initial taisabaki evasive movement with which every aikido technique should start. You also turn your body a full 90° to extend your arms forward up right in front of you. The square angel to the line of attack makes a perfect compromise between you and your attacker. If you go in closer to the attacker (a narrower angle than 90°), you risk stabilizing the attacker enough to resist your entry. If you go further away from the attacker (more than 90°), you don’t turn his or her body enough away from you to avoid a strike with the other hand.

This 90° angle is very important in shihonage omote. It doesn’t have to be exact, of course, but the more precise the better. Just like in the sword arts, the most important finger in your grip is the little finger. That’s what you should focus on. It’s the finger that needs to hold on the tightest. In the throw, you should even squeeze it a little extra, to create the initial forward down movement that is the actual cut in the sword arts.

You are the strongest when both your hands stick together, even if just one of them grabs the attacker’s wrist. Don’t let the other hand move away to your side. That risks tilting your whole body to the side, and you will not be centered. Better to stick to the two-handed sword grip form, as much as possible.

If you don’t plan to follow up with an osae pinning, you can release your grip of the attacker’s wrist when he or she is falling to the ground. That should be approximately when your hands are back at chudan kamae, in front of your belly.

Don’t step forward with the leg furthest from the attacker, when ending the throw. That’s a weaker position than when your closest leg is forward. The attacker might pull you down. Also, with the wrong leg forward you are less protected from strikes and kicks.