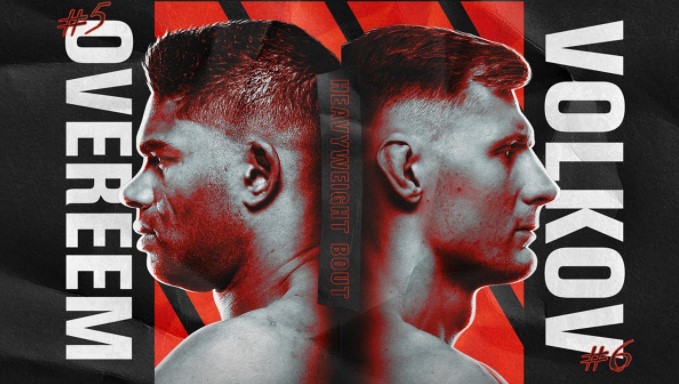 Alexander Volkov has a lot of wins on his UFC resume but arguably none more impressive than his finish on Saturday night.

Taking on Alistair Overeem in the UFC Vegas 18 main event, Volkov put on a striking clinic as he picked apart the former K-1 Grand Prix champion on the feet before finally connecting with a brutal left hook that ended the fight. As soon as Volkov’s punch landed, Overeem just crumbled to the ground and that was enough for referee Jason Herzog to stop the contest.

The stoppage came at 2:06 into the second round.

“I feel great, I feel really excited,” Volkov said following his second consecutive win. “It’s my time. I work a lot with my jab with my striking and I also work a lot with the wrestling but I feel good in the stand up.

“I feel I could finish him in the second or maybe the third round. I saw his face, he has a lot of cuts and blood. I was just waiting for a good punch. This is not the finish of my form, I’ll be better.”

With two heavy-hitters in the cage, there was no room for error with Volkov stalking Overeem across the octagon with his long reach, which included a stiff lead jab. While Overeem was coming back over the top with hard overhand left, Volkov was just pouring on the punishment with punches in bunches as he looked to overwhelm the former title contender on the feet.

The constant attacks from Volkov on the feet left Overeem struggling to find any kind of counters and by the end of the opening round, he had blood pouring down his face thanks to the pinpoint accuracy coming from the Russian’s strikes.

It was all about the fundamentals from Volkov as he continued to tag Overeem with the same slick left-right combination that “The Demolition Man” just could not defend.

Once Overeem started backing up against the cage, Volkov smelled blood in the water and he just came forward with blitzing combinations but never allowing himself to take a punch in return. Finally with Overeem dazed and confused, Volkov cracked him with that final left hook that stopped the fight.

Volkov is now 3-1 in his past four fights with his only loss coming in a decision to Curtis Blaydes this past June. While he knows a title shot isn’t next for him, the 32-year-old heavyweight contender made it clear that remains his end goal and he’s one step closer following the win against Overeem.

“For sure, I want to fight for the belt,” Volkov said. “But we will see. We have some good fights in the future at heavyweight. We’ll see what will be my place but I surely want to take a title shot.”