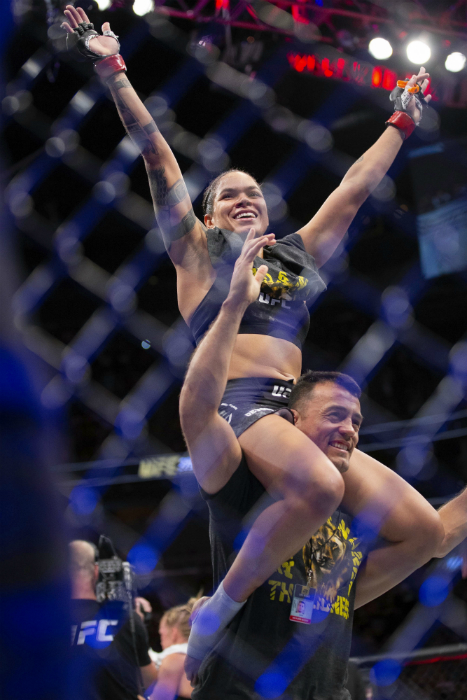 Amanda Nunes was already considered the greatest women’s fighter of all time before competing at UFC 250. Nothing dispelled that mystique on Saturday night as the reigning two-division champion absolutely dominated Felicia Spencer from the first second of their fight until the last as she defended her featherweight title for the first time.

The scorecards read 50-44, 50-44 and 50-45 with Nunes winning her 11th consecutive fight overall. While it was somewhat shocking that Spencer survived to the end, Nunes paid homage to her opponent for the incredible toughness she displayed.

“I’m not surprised,” Nunes said afterwards. “I know she’s very tough. I know what she’s capable of. I know she’s tough. I have to be sharp.”

In the first few exchanges it appeared Nunes was going to add another knockout to her resume after she clubbed Spencer with a couple of powerful right hands that would likely finish many opponents. Somehow, Spencer stayed upright as she tried to apply her grappling game by slowing Nunes down in the clinch.

That backfired after Nunes surprised her with a whizzer and then began dropping elbows from the top position for the remainder of the first round.

While she didn’t fade away, Spencer was just outmatched on the feet as she continued to eat punches with Nunes blasting her with thudding right hands again and again. With a smirk on her face almost the entire fight, Nunes continued walking Spencer down and then unleashing her powerful strikes.

By the time the third round was winding down, Nunes was in absolute control, tagging Spencer with a barrage of punches and then making her pay with kicks as well. Spencer was starting to fade without any hope of getting Nunes to the ground as the damage she was absorbing really started to add up.

With Nunes battering Spencer’s lead leg, the two-division champion really started to stalk her prey as she hunted for the finish. As time ticked away in the fourth round, Nunes went for the kill as she put together a series of punches that had Spencer nearly out on the feet.

Nunes almost wrapped up a rear-naked choke with seconds remaining but Spencer survived to the end of the round as she went back to her corner with hematomas swelling and blood streaked across her face.

In only got worse during the final five minutes with another cut opening up and Nunes just punishing Spencer in every exchange on the feet or on the ground. By the end of the fight, Nunes was just rag dolling Spencer around the cage as she cemented the victory.

Now with title defenses at bantamweight and featherweight, Nunes has all but obliterated every legitimate contender in both divisions. The question remains who will challenge Nunes next but for now she’s going to concentrate on more important matters — like the birth of her first child.

“That was my goal, defend my two belts,” Nunes said. “I’m so happy right now. I don’t know what is next. I had a fifth corner today. I have my daughter with me.”