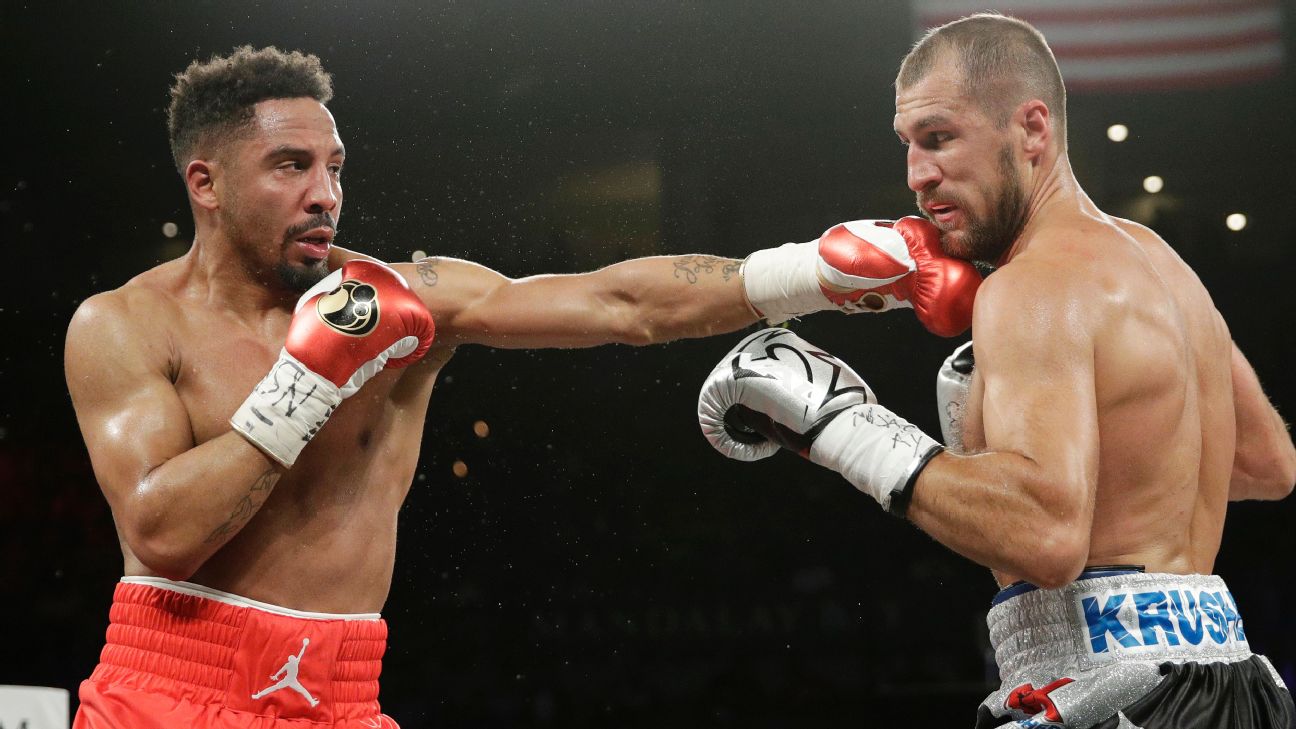 Former two-division champion and pound-for-pound king and newly-announced Hall of Famer Andre Ward has been out of the ring since 2017, when he retired at the age of 33 with an undefeated record of 32-0 (16 KO). Now a month out from his 37th birthday, Ward has stuck to the decision, working as an analyst for ESPN these days.

Ward sat down with Ak & Barak to discuss various subjects in boxing today, and of course the idea of him coming back came up, because it’s going to until he really is too old to be considering it. There have been little more than whispers about Ward returning to the ring in the last three-and-a-half years, but you never say never with boxing.

There was no deep dive into him potentially returning, but he was asked a sort of interesting question. If he returned, would he want to do it against Canelo Alvarez, felt by many to be the top pound-for-pound guy out there today, the biggest name in boxing, and a guy right around Ward’s weight? Or would he opt for a big swing like Anthony Joshua in the heavyweight division?

Asked if he felt Joshua would beat Tyson Fury if/when those two meet — which could be coming soon — he had a clear pick for that one.

“Not the Tyson Fury I’m looking at and that I’ve been looking at the last two years,” he said. “Anything can happen, it’s heavyweight boxing. But right now, it’s Tyson Fury.”

Ward also spoke about Sergey Kovalev recently failing a drug test for synthetic testosterone, which scrapped a planned Jan. 30 bout with rising contender Bektemir Melikuziev. Ward, of course, knows Kovalev well, as the last two fights of his career were against the Russian in 2016 and 2017, a pair of rather controversial wins for the American.

“I can’t say that I was surprised, and that’s no indictment on Kovalev,” Ward began. “I’m not saying I felt like he was using something, but I’ve been in the game a long time, and there’s way bigger names than Kovalev that have tested positive, so I just know it’s an option for guys.

“You do the math, you realize he’s getting older, he’s slipping, and guys tend to do things like that when they’re trying to hold on to a career, and they know that physically they can’t match up with the young guys that they’re facing. I wasn’t surprised. It’s unfortunate. A lot of people wanted me to kind of pile on, but I’m not that kind of guy, I’m not gonna kick a guy when he’s down.

“I just really hope Kovalev assesses his career and his life and gets everything together, because this thing is gonna end, I’m talking about the sport. He’s gonna walk away one day. You just hope he’s built something he can be happy with but he’s a whole enough man he can go on and live a productive life, because the man has a family.”

As for Canelo Alvarez, who has an upcoming fight with Avni Yildirim on Feb. 27, Ward gave his thoughts on a big star taking that sort of fight, and said fans shouldn’t be upset with it.

“It’s really the name of the game. I don’t care what your resume is. It’s not healthy to face a top guy fight in and fight out,” Ward said. “You won’t last long, and if you do, you’re gonna have some issues after your career is over. It is a chess game.

“So you gotta take a hard fight, maybe a decent name, like he just fought Callum Smith. Then you gotta take a mandatory, the mandatory is out of his hands, he’s gotta satisfy that with the WBC. And then take another good name in the sport with Billy Joe Saunders. I don’t have a problem with that at all.”