Anthony Smith needs a break after fight with Gustafsson 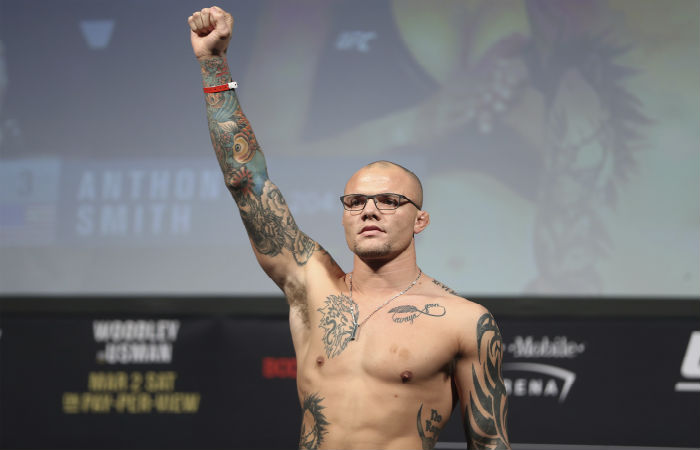 Anthony Smith will take whatever fight the UFC offers, as long as he’s healthy and strong enough. But he jokes the promotion might have trouble reaching him after “UFC on ESPN+ 11”.

“I’ll change my number just so they can’t call”, Smith told “MMA Junkie” in advance of his meeting next week with Alexander Gustafsson.

A few weeks after the devastating loss against light heavyweight champion Jon Jones, Smith pulled himself back together for a fight against Gustafsson. “The viking” had also been soundly beaten by Jones in his previous outing.

“Initially, it wasn’t what I want to do,” Smith said. “But that’s part of life, is doing what you need to do, not what you want to do. I knew if I turned the fight down, I would have regretted it later.

In a week we will be LIVE at #UFCStockholm 🇸🇪

Turn ON notifications to not miss our insights.. 🔔

Not only bets, but also pictures and videos will be posted! 👊 pic.twitter.com/GGXVBo6oox

“It was just so fresh after the Jon fight, the last thing I wanted to think about was fighting. But I knew once the initial shock and disappointment and depression wore off a bit, I’d want to get back on the horse. Fortunately, I was right.”

Smith won’t go into detail about the physical ailments he’s currently dealing with. Whatever they are, he said they were a factor in his fight with Jones:

“Most people wouldn’t have taken this Alex fight, and that’s just who I am”, Smith said. “I’m going to do it because I said I would do it. And after this, I’ll take the break that I need to fix the things I need to get fixed.”

Smith professes he’s “as injury-free now as I’ve ever been.” But he doesn’t see himself fighting again before December or January. Time off is no longer a wish; it’s a requirement.

“Obviously, I’m going to have to have a conversation with the UFC and say, ‘Listen, I need a break,’” Smith said. “Just don’t call and leave me be.”

It’s not a bad thing to be in demand, of course.

“I didn’t feel like I had to take it,” Smith said. “I’ve been pretty active. I’ve been pretty successful up until the Jon fight, especially (at) 205. I’ve hit a lot of bonuses. I just got a nice paycheck. I don’t need to fight.”