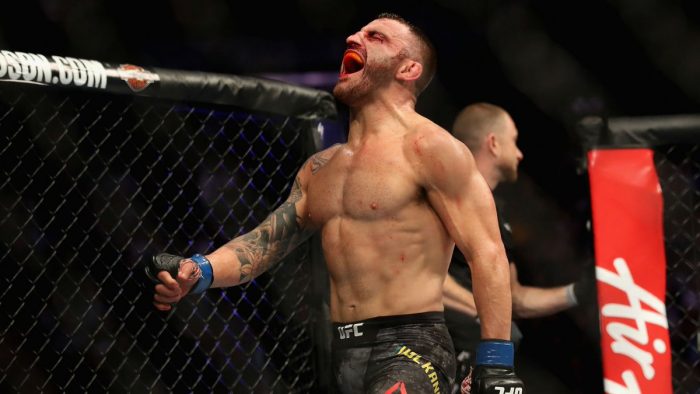 This past October, Australia’s lone UFC champion Robert Whittaker was toppled by his New Zealand counterpart, Israel Adesanya. Now, just hours away from UFC 245, Alexander Volkanovski (20-1) looks to bring a title back to his country.
In this Saturday night’s co-main event, he’ll look to dethrone Max Holloway and become just the fourth featherweight champion in UFC history. On top of that, he’ll be just the second from his native Australia.

“It does mean a lot to me, to do this for Australia. Obviously there’s a lot of people back home supporting me so it’ll be good to bring that belt back home,” Volkanovski told RT Sport at UFC 245 media day.

For Volkanovski, MMA wasn’t his first love as originally he played professional rugby back home. So while he has the ever-growing support of all the fans that he’s accumulated over the course of his MMA career, he’ll also have his old mates rooting him on as well.

“The rugby support has been good, it’s been good. It’s always good. Obviously, I have that rugby league background. I don’t know, they love [this] sport as well,” he said.

On the other hand, there is the reigning champion in Holloway. The “Blessed” one is seeking his fourth career title defense by taking out Volkanovski and this fight will act as his second since returning to his division of 145-pounds after attempting to capture interim gold at lightweight. When Holloway did so, he would once again fall to his old opponent Dustin “The Diamond” Poirier.

Prior to Holloway’s brief jump to 155-pounds, he seemed to be plagued by some potential health and or weight issues. After seeing Holloway return successfully against Frankie Edgar in Holloway’s last fight, Volkanovski isn’t worried about the champ coming in over the limit.

“I think I’m gonna see the best Max Holloway. I don’t think the weight cut’s gonna be an issue – I hope not,” the Aussie expressed.

“If I take him out, will the people make that excuse? Maybe, maybe they will. But that’s not gonna be the case. I know the reason why I’m the guy to do this and I’m gonna prove it Saturday night and I may be able to open a lot of eyes and make people go ‘Wow. He said exactly what was gonna happen and the problems he was gonna face were not a problem.’

“And again, man I’m not a cocky talk person. He’s a great person, he’s a great champion, he’s done great things but it’s time for me to do great things in this division.”

Volkanovski and Holloway have both proven to likely be the most well-rounded fighters in their entire division. Which makes the fight all the more exciting. When it comes to where the fight could end up going, Volkanovski things it will be an all over the place kind of war.

But, if Holloway were to happen to miss weight, the former rugby star admits he would absolutely still take the fight.

“I think the doctors would stop him before he stops himself from making weight,” he said.

“I believe he’s gonna make weight, I’m hoping he does. To be honest, hopefully, they still let us fight even if he misses weight. We train very hard, fighting’s the easy part. I struggled – I didn’t struggle – but training was hard. The last thing I want is to not fight.”