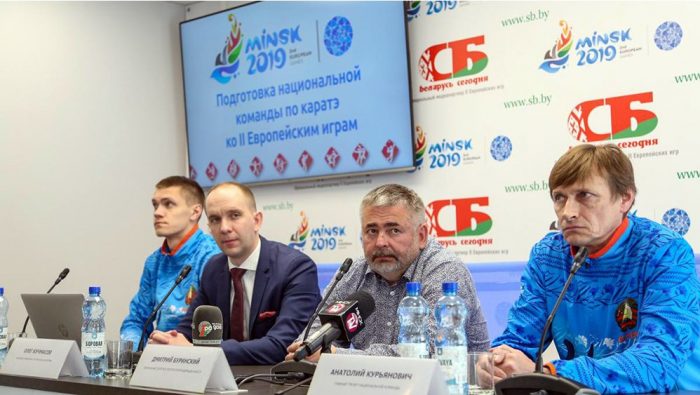 Representatives of the Belarus Karate team to take part at the 2nd European Games shared details of their preparation and their expectations ahead the multi-sport event to be held in Minsk from 21 to 30 June 2019.

With less than 50 days to the start of the second edition of the European Games, the members of the Belarus Karate team showed their anticipation to succeed at home at the memorable event.

“About 15,000 people train Karate in Belarus. Thanks to the 2nd European Games, we can show that our country is ready to host competitions of the highest level. We would like to hold Karate 1-Premier League competitions in Belarus in the future,” said the Secretary-General of the Belarus Karate Federation Dmitry Burinsky at the press conference which took place at the Belarus Segodnya publishing house.

As ticket sales show, karate is very popular in Belarus. According to Dmitry Burinsky, half of the tickets have already been sold with less than two months to the start of the Karate competition.

The national team is currently training at the Olympic center in Stayki, and the athletes will travel to Istanbul to participate in the Karate 1-Series A event there ahead of the 2nd European Games. The head coach of the squad Anatoly Kuryanovich believes that some of the team members could win medals.

“The best athletes in Europe will take part in the karate event, but our karatekas are also ready for the fight. We are expecting the best possible result from each one. There are athletes in each weight category who can win medals,” said Kuryanovich.

Among the favorites to succeed at home in Minsk, raising Belarus star Anton Isakau hopes to use the support of the local fans in his favor.

“There are a lot of strong athletes in my weight category. The athletes from France, Turkey, Italy, and Spain have prepared well. Belarus is also high up in the European rankings — I think this is because we fight to the end. The home arena adds confidence because here we get support from the country, our family and friends. But the responsibility on us is huge too,” said the karateka who is ranked sixth at the WKF World ranking and who is the current European Championships runner-up.

Meanwhile, as the start of the anticipated event is fast approaching, preparations continue in Minks to host the spectacular competition. The venue manager of Chizhovka Arena where the karate tournament will be held Oleg Kuchmasov spoke about the venue’s readiness for the Games:

“There will be a large competition and small (warm-up) arena. As of May 1, preparations will begin on the large arena, including dismantling the fence and some structures. At the beginning of June, this work will be completed, and then the workers will start on the small arena,” said Kuchmasov.