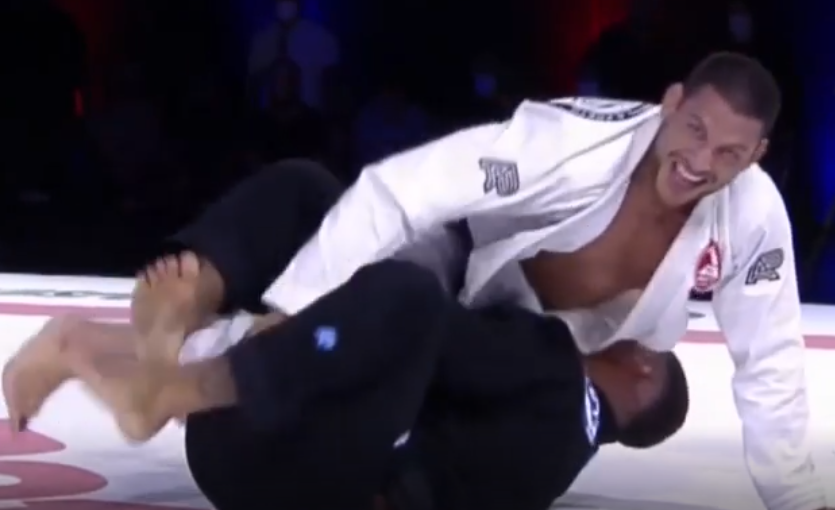 Felipe Pena and Gutemberg Perreira both made it to the finals at BJJ Stars 5 tonight following a night of exciting matches in the Heavyweight Grand Prix that, for Perreira, included a huge upset win against Nicholas Meregali in the first round. In the end, Pena came away with yet another victory on the BJJ Stars stage, though it wasn’t an easy journey there.

Perreira pulled guard, but Pena refused to engage, forcing Perreira back to his feet. Pena then pulled guard and managed to bring Perreira down with him with some strategic push-pull on the bottom. Perreira managed to get back to the feet, and Pena kept a grip on his pant leg. The competitors were soon reset, and Pena worked to control Perreira’s leg and elevate him for the sweep, but Perreira managed to stay balanced atop Pena’s legs as Pena moved beneath him.

Perreira finally managed to free his leg and put pressure down on Pena, but Pena managed to retain his guard and move back to single-leg X, tripping Perreira to bring him back to the ground with him. After trapping Perreira’s leg, Pena managed to come on top, bringing the score to 2-0 with each athlete having an advantage on the board. Pena couldn’t manage to pass Perreira’s guard, though, and Perreira managed to scramble out and bring the match back to the feet with just over two minutes left to go.

Perreira pulled guard and tried to get beneath Pena for a berimbolo attempt, and Pena shut it down as Perreira tried to come up for a sweep. Pena flattened out Perreira in a nearly north-south position, but Perreira still kept a hold of Pena’s leg and lapel to prevent the pass. With under thirty seconds left, the competitors went out of bounds and were reset in a neutral standing position. As the clock wound down, Perreira attempted a takedown that Pena shut down. He then pulled guard and tried a last-second attempt at a sweep. Still, Pena was all smiles in the last few seconds of the match, taking home the win and the championship title via points, 2-0.