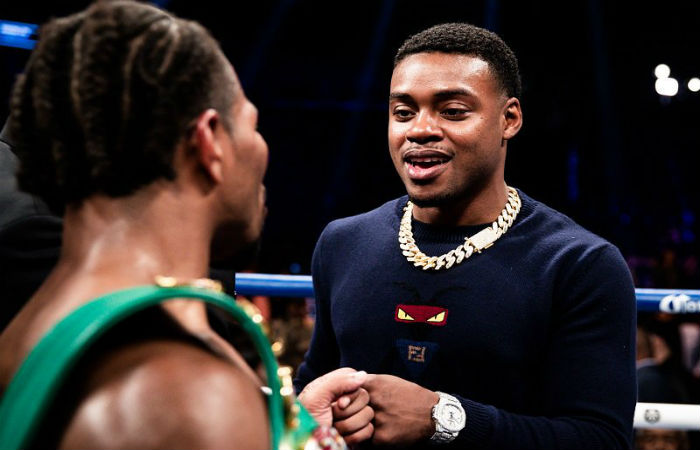 The welterweight division is loaded with talent, but there’s one big problem: almost all of the top names are under Al Haymon’s PBC banner, fighting on FOX and Showtime, while there’s also Terence Crawford, the WBO titleholder promoted by Top Rank, fighting on ESPN.

But the fight everyone really wants to see, and see now, is a matchup between Spence (25-0, 21 KO) and Crawford (34-0, 25 KO). It seems near impossible, as it would have to be a pay-per-view fight — well, it wouldn’t have to be, but if Spence-Mikey Garcia and Crawford-Amir Khan are, then yes it would — and getting all the various angles of that figured out isn’t easy.

Top Rank’s Bob Arum does think it’s easy, or at least that’s the line he’s selling to the media right now. As Crawford prepares for his largely buzz-bereft pay-per-view defense against Khan (33-4, 20 KO) on April 20, Arum says that if Crawford wins as basically everyone anticipates he will, then he’ll call Al Haymon the following Monday and attempt to make the fight.

What makes Arum say it’s easy? He believes they can use the blueprint from the Mayweather-Pacquiao event in 2015, when Showtime and HBO worked together for the pay-per-view. That had happened once before, too, for the Lennox Lewis-Mike Tyson fight in 2002. Both were massive pay-per-view hits; Lewis-Tyson sold 1.97 million pay-per-views in the States, and of course nothing was ever bigger than the 4.6 million sold by Mayweather-Pacquiao.

Getting FOX or Showtime and ESPN to work together could be a whole other deal, though, plus before any of that, you actually have to convince PBC to do it if you’re Arum. Arum has little-to-no leverage here, it would seem — it’s his fighter, Crawford, that desperately needs a major fight. If Crawford beats Khan, who is a Matchroom fighter that Top Rank overpaid to get something even remotely appealing for this date, then in-house, they’re left with the following possible options, at least as of this moment:

Egidijus Kavaliauskas, who just went to a draw with Ray Robinson and wouldn’t be taken seriously as a Crawford challenger
Luis Collazo, a still-solid veteran, but about to turn 38 and hasn’t been a serious contender in several years
Chris van Heerden, a South African vet who was thrashed by Spence in 2015 and also isn’t a serious contender
Alexander Besputin, a 27-year-old Russian and a good fighter on the rise, but has no name value
Kudratillo Abdukakhorov, a 25-year-old from Uzbekistan, also has no name value, and is sitting on an IBF mandatory to face Spence (in theory)
On the other hand, Spence has the Porter fight potentially next if he stays within the PBC family, and that’s a good fight. After that, he could have the Thurman-Pacquiao winner or Danny Garcia, also good fights.