Boogey Vs. Fowler, Modafferi Vs. Loewen lined up for title matches at SUG 21 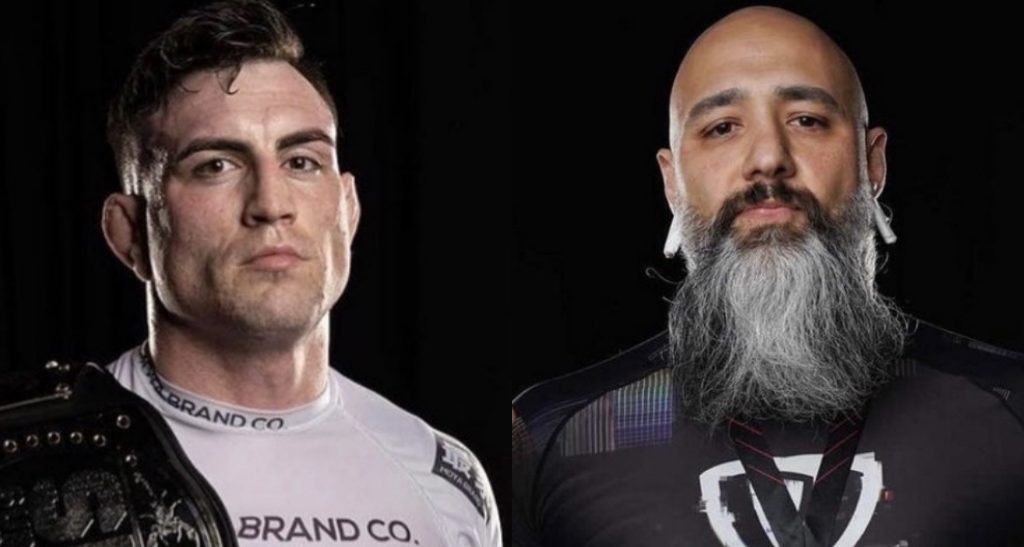 Submission Underground has released their official poster for their first event of 2021, and they’re making a big entrance with their SUG 21 lineup.

Not one, but two championship matches will take place at their March 28 event, with Richie “Boogeyman” Martinez stepping up to challenge Mason Fowler for the male absolute title and Roxanne Modafferi joining to fray to try to claim Amanda Loewen‘s title.

Fowler has been on a roll since SUG 15, claiming the championship title from Craig Jones in a controversial win at SUG 16 and then defending it at the next event. Since then, he’s retained his place at the top, beating Vinny Magalhaes, Satoshi Ishii, and most recently, Ryan Bader to leave no question as to whether or not he deserves to be there.

As usual, SUG has packed the rest of their main card with big stars from a variety of martial arts disciplines. UFC flyweight fighter Jessica Eye will be taking on Bellator fighter Ilima-Lei MacFarlane in McFarlane’s promotional debut, and Olympic gold-medal-winning judoka and SUG regular Satoshi Ishii will be returning to face CJJ and multiple-time SUG veteran Andy Varela, who is currently on a three-event winning streak for the promotion.

Also on the card will be a tag-team match that was announced in February. At the time, only one team — comprised of BJJ brown belt Ricky Simon and BJJ purple belt John Simon — had been announced. Now, the duo has found their opponents: 10th Planet brown belt William Audifre and BJJ black belt and Jiu-Jitsu Overtime veteran Mike Currier. It’s been a while since the promotion’s last tag team event, and this match between four grapplers with exciting jiu-jitsu styles should be a fun one to watch.
Martinez is also a familiar face at Submission Underground, getting his most recent win in under a minute against CB Dolloway at SUG 20. Indeed, his only loss in his four appearances for the promotion was an overtime defeat against Austin Vanderford, and now on a three-match winning streak, Martinez will be eager to add a championship title to his record. Fowler is a formidable opponent, but make no mistake — Martinez has earned his right to challenge him for the title. 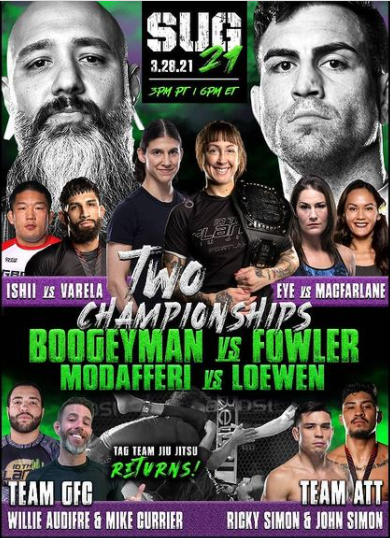 Loewen, for her part, made SUG history when she became the promotion’s first female champion at their nineteenth event. She had to beat UFC fighter Felicia Spencer to make it happen, and she did it in decisive fashion, getting the submission by way of armbar with just over a minute before regulation ended. The result was hardly a surprise to those who’d been following Loewen’s career — she’s had five matches at SUG, and all of them have ended with her armbarring her opponents either in regulation or overtime.

Modafferi has considerably less experience with grappling-exclusive matches, having done most of her work as a fighter for the UFC. However, in between her most recent fights (the first of which resulted in a win against Andrea Lee and the most recent of which took place against Viviane Araujo), she took a match against fellow BJJ black belt Danielle Kelly at Submission Hunter Pro 60. Although she ultimately lost the match against Kelly, she’s a worthy opponent for Loewen in this impressive matchup.