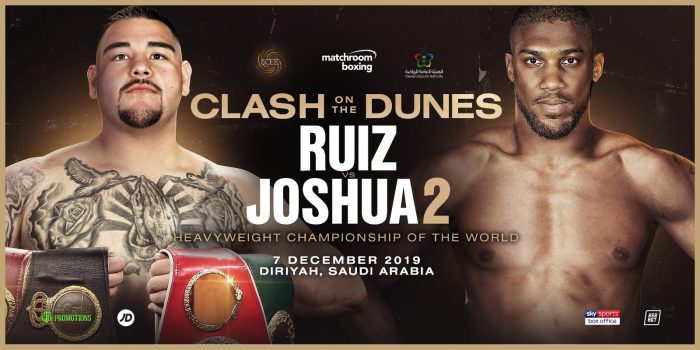 Former British star fighter Chris Eubank Sr. took some time to chat with Fight Hub TV about his breakdown of the rematch between Andy Ruiz Jr. and Anthony Joshua, and you just might be a little surprised by his take. Check it out…

Eubank Sr. on his thoughts about Ruiz-Joshua 2:

“Ok, look, firstly let me put across this truth which no one seems to — or very few people seem to take note of. ‘Who do I like? Who do I want to win?’ It’s not about who I want to win, boxing is not about personality. If I want to see a personality I’ll go switch the TV on and watch Dave Chappelle…

“Boxing is about being able to absorb punishment, it’s about fortitude, it’s about integrity, it’s about discipline. So it’s not about who do I like. Obviously Anthony’s British, I’m British, Ruiz is a Mexican. So what am I supposed to be against Ruiz because he’s Mexican and I’m British? No!

“You know, the view has to be ‘Who has dug deepest? Who has paid the price in the school of boxing?’ So you have junior school, secondary, college, university, you become a professor, you become a doctor. If a fighter — not through his own fault, through the fault of those looking after him — is forced to skip college and is put straight into university, what do you expect to happen when he meets a guy who has gone through all the schooling aspects of boxing?

“I’m gonna say it to you like this and I’ll say it short: at 16 fights Anthony Joshua was given what looked like a gift — Charles Martin and the IBF championship. Remember, you’re still in secondary school, son. So you win this fight and effectively you’re in university. Well, what happened to college?

“College is a four-year course, you can’t make it up in five months. You just can’t. So let me leave you with that and it’s not really difficult to work out, ok?…At this level of boxing there isn’t any luck. There isn’t any luck. So you do the calculation.