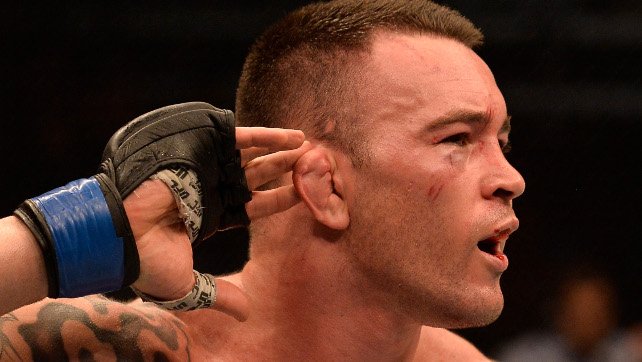 At UFC 235, Kamaru Usman dominated Tyron Woodley to become the new UFC welterweight champion. In the post-fight press conference, Usman was already making plans for his first title defense, saying he was going to enjoy ”brutalizing” former interim champion Colby Covington. So excited was he about the prospect of fighting Covington, that the next morning he and his manager, Ali Abdelaziz, created a public disturbance when they ran into him at the buffet in the Palms Casino. In the video, you can see the confrontation go on for an extended period of time and even see Abdelaziz throw a punch at Covington, who is surrounded by innocent bystanders.

Speaking with Ariel Helwani on Monday, Covington gave his side of the incident, saying that he was minding his own business when Usman and crew tried to attack him.

“I was staying over at the dump, the Palms, and I’m waiting in the buffet line,” Covington detailed. “I’m just trying to get some crab legs. Can’t the man get some crab legs? Can the man, the champ, get some crab legs in peace? All of a sudden low-energy Marty comes, that terrorist rat Ali comes and some other Sasquatch and they start pushing and swinging and start putting innocent kids’ lives in danger and a pregnant lady. There’s a pregnant lady, and she’s screaming, ‘I’m pregnant, stop this!’ and Ali is still pushing, trying to make a scene, Usman is still trying to scream at me, ‘I’m going to get you!’ and his little Sasquatch is throwing punches at my friend and trying to punch me. It’s a complete joke. I can’t believe that they allow that in Vegas. Just a bunch of filthy animals.

“. . . Ali tried to swing at me, but I’ve got cat-like reflexes, so obviously he’s not going to hit me. He’s slow as a f*cking turtle. . . You’ve got Ali acting like he’s a fighter and I’m like, ‘Chill out, dude, you’re not even a fighter. Maybe you’re 1-15 as a fighter but you’re not a real fighter.’ Marty should be on his little victory tour of winning his number one contendership fight but he’s getting all hostile.”

The video does seem to back up much of what Covington is saying, as Usman and Abdelaziz continually try to press the issue despite the interventions of security. But despite that fact that Covington was just minding his own business when this all popped off, “Chaos” says he was still banned from the property, while, he believes, neither Usman nor Abdelaziz were punished in any way.

“I heard that no one got in trouble,” Covington said. “I know that the Ferttitas own the Palms so I think they gave that terrorist rat a pass. They didn’t want to hurt Marty Usman’s chances by deporting him back to Nigeria before he gets his ass whooped by me.

“. . .They banned me from the Palms property for doing absolutely nothing. Just sitting there saying, ‘Hey man, we’re professionals. I’m going to beat your ass in the cage man. I’m not going to press charges on you because the real f—ing punishment for you is that beating you’re going to get when we’re in that octagon. I don’t want your ass deported back to Nigeria.’”

Of course, lost in the shuffle is the fact that the night before, Usman put forth the best performance of his career, dominating a long-reigning UFC champion to win the title. But with Covington now seemingly set to face Usman for the title, “Chaos” was not nearly as impressed with Usman’s performance as everyone else, saying Usman has just been getting his sloppy seconds because he has beaten Woodley plenty of times in the gym.

“[Tyron Woodley] was so busy worrying about that album ‘Chaos Theory’ – he was busy trying to make some rap album about me – he didn’t even want to fight,” Covington said. “He’s cashed out. He just showed up to those Pay-Per-View points off Jon Jones. Tyron Woodley was a shell of former himself and that wasn’t a legitimate win. That was another win for Usman that he did something after I already did it. I already beat Woodley’s ass many years ago. I already beat Maia’s ass, I already beat RDA’s ass. He keeps doing all these things after I’ve already done them. . .

“B*tch, you’re time’s up. Enjoy your number one contendership win but next you’re gonna get your ass whooped.”