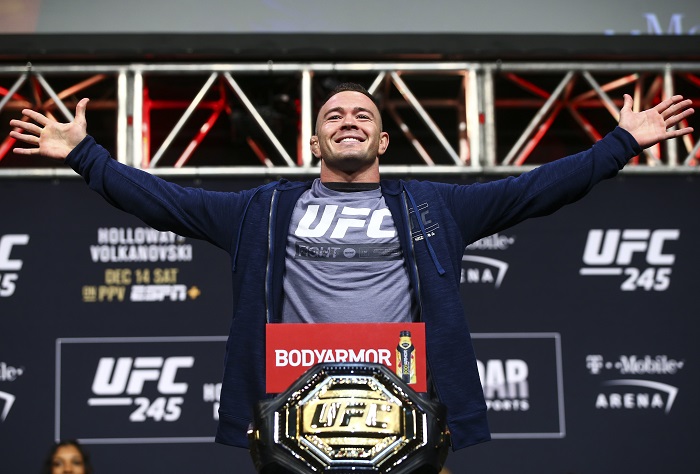 Colby Covington has a lot of big wins on his record but none were more satisfying than the one he got at UFC Vegas 11.

Following a heated rivalry that stretches back several years, Covington dominated former welterweight champion Tyron Woodley from the first second of their fight until the last before earning a fifth-round TKO. The fight ending sequence actually came after Covington secured a takedown and Woodley screamed out in pain after it appeared he may have suffered some kind of rib injury.

Regardless of the circumstances, Covington was already pitching a shutout for the better part of 20 plus minutes before handing Woodley his third consecutive loss in a row

Never at a loss for words, Covington shouted out President Donald Trump in his post-fight speech, took a shot at NBA superstar LeBron James and then took aim at a pair of potential opponents in Kamaru Usman and Jorge Masvidal.

“I want to dedicate this fight to all the first responders, all the military out there,” Covington said. “This world would not be safe without you guys. You keep us safe. Not these woke athletes. I’m sick of these woke athletes, these spineless cowards like LeBron James.

Before he called out future opponents, Covington first had to get through Woodley and he set the pace early by showcasing his wrestling and testing his former teammate’s takedown defense. After taking the fight to the ground, Covington was able to showcase his superior grappling as he looked to employ a pressure-filled game plan in an attempt to out work Woodley.

On the feet, Covington wasn’t trying to overpower Woodley but instead he used a signature volume striking attack. Again and again, Covington was the aggressor while closing the distance and pushing Woodley around the octagon.

Woodley did manage to land a couple of stiff right hands late in the second round but he just wasn’t attacking with a lot of ferocity as he accepted his position being stuck against the cage.

When Covington wasn’t closing the distance, he was looking for a series of kicks while punishing Woodley to the body and then going back up top to the head. As usual, Covington’s pace was relentless and Woodley was struggling to get separation or do much damage of his own.

As the fight moved into the championship rounds, Covington turned back to his wrestling with a takedown that put Woodley on his back with his head against the cage. Covington began to methodically set up his ground and pound including a nasty elbow that sliced down on Woodley, opening up a gruesome cut that saw blood splash across the former champion’s face.

Between rounds, Woodley’s coaches told him the only way he was going to win was to finish Covington in those final five minutes but he barely got a chance to throw a punch.

Once the round started, Covington was immediately in Woodley’s face where he secured another takedown. Woodley tried to hold onto a guillotine choke but as Covington escaped, he let out a scream, which forced referee Dan Miragliotta to stop the fight.

It appeared Woodley may have broken a rib, which gave Covington the win with the end coming at 1:19 into the fifth and final round.

The win undoubtedly puts Covington back on track for either another title shot with a potential rematch against Usman or possibly settling another rivalry against a past teammate in Masvidal.

For tonight, Covington can just enjoy the spoils of war as he celebrates a lopsided win over Woodley.