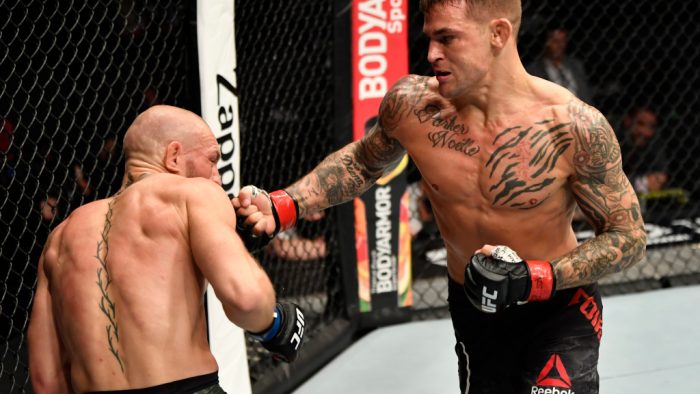 Colby Covington jumped at the opportunity to rip Dustin Poirier following his title loss at UFC 269.

“The Diamond” was submitted by lightweight champion Charles Oliveira in the main event Saturday at T-Mobile Arena, falling short a second time in his quest for the gold.

Having traded barbs with Poirier in the past, Covington piled on his former American Top Team teammate.

“Just the quitter mentality of Dustin,” Covington told Submission Radio. “He’s always been like that. Doesn’t like to work hard. You know, living off beating Conor McGregor, what’s the big deal about beating Conor McGregor anymore these days? I mean, he has a great legacy, did some great things in the past. The guy made a lot of money, but he doesn’t have that same drive anymore.”

“So, beating a guy like that is not going to mean you’re going to be some world beater or the best in the world. So, that’s what I saw. I figured he’s gonna gas out, and he was going to eventually quit. And that’s what he did, just like in the Khabib fight. He quits, he puts his head on the mat, and he leaves his neck open so he can get rear-naked choked. So, it wasn’t a surprise.”

Covington is currently angling for a fight with another former teammate in best friend-turned rival Jorge Masvidal.

“There’s a lot of options out there,” Covington said. “You look at this bully that fought last night. You know, Dustin ‘Soyrier,’ Louisiana swamp trash. He said a lot of things too in the media. And now he’s saying that he might come up to 170. He wants to come fight in a real man’s weight class. So, this is another personal fight. These are different types of fights, man. This isn’t about the rankings. This is about personal grudges and being held accountable for your actions.”

“You said ‘it’s on site when I see you’ in the media, it’s this and that. He’s talking this big game like he’s a street fighter, he’s some badass fighter. Stop cutting all that weight, Dustin. Come up to the real man’s weight class, welterweight, and let’s do this, man.”