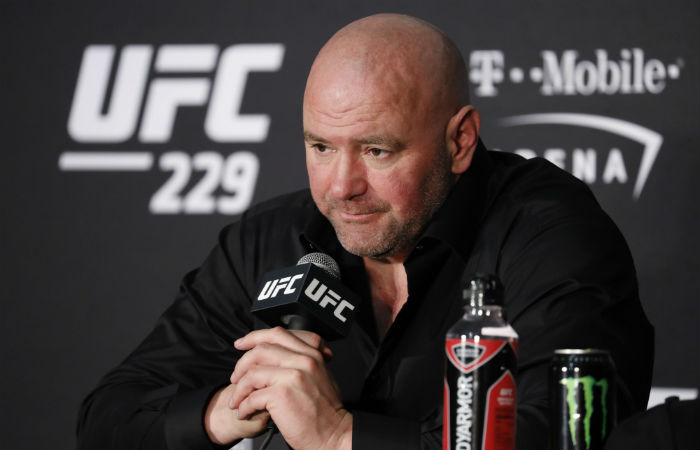 The UFC president Dana White told Megan Olivi in an interview posted Monday to the UFC’s YouTube channel that he has extended his deal with the promotion for seven more years. White’s extension seems to have come in accordance with the UFC extending its distribution deal with ESPN, which now includes pay-per-view events moving exclusively to ESPN+. The UFC-ESPN partnership was initially five years, but it has been expanded to seven, it was announced Monday.

White, 49, started as a part owner of the UFC in 2001, when the promotion was purchased from Semaphore Entertainment Group by White’s longtime friends Lorenzo and Frank Fertitta. He was installed immediately as the company’s outward face and fight promoter.

The Fertitta brothers sold Zuffa, the UFC’s parent company, to WME-IMG (now called Endeavor) in 2016 for reportedly more than $4 billion. White reportedly owned 9 percent of Zuffa at the time and he remained on in his role as president.

White said the UFC’s distribution deal with ESPN is the biggest thing the UFC has done in 26 years as a company.

“A lot of big things have happened to us over the years, but once you make it to ESPN, you know you’ve made it as a sport,” White said. “And right now, if you look at our deal, where we’re at, what we’re doing, we’re now one of the top four sports in the United States. The Big Four has changed. We are now one of them.”

On his relationship with Emanuel, the widely known former talent agent turned Hollywood entertainment mogul, White has been “perfect,” which is not always expected since he had a great relationship with the Fertittas. White said it was “almost impossible” to have that seamless transition “especially when you talk about the egos and the money, control and power and all the things that go along with a company like this.”

“I would say that the relationship with me and Ari, I do what I do over here,” White said. “I have the vision for where the sport is gonna go and what we’re gonna do and the different types of fights. And what Ari does, Ari is the guy that can pick up the phone and get anybody on the phone. And Ari can raise money like this.”

White promised that the new PPV deal with ESPN will great for all parties involved, including the fans. He added that more “incredible” content is being worked on for UFC Fight Pass, including the return of The Ultimate Fighter this summer.

“It couldn’t have been better timing,” White said. “Everything worked out perfect and for a company that wouldn’t cover us years ago, now they love us so much it’s awesome. For somebody like me, who’s been here since Day One, it’s all sort of surreal. But this is what we always dreamed of. We’re doing what I always believed we could do and what I hoped someday we would do. It’s everything me and UFC fas ever dreamed of. And every fighter.”