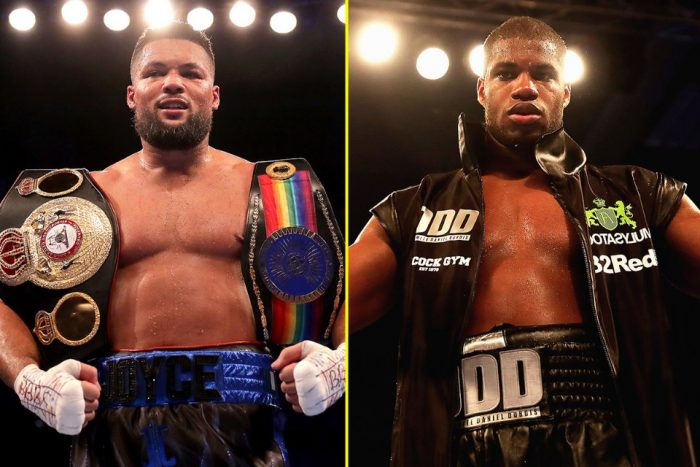 A much-rumored and much-anticipated clash of unbeaten British heavyweights is officially set for April 11 at London’s O2 Arena, with Daniel Dubois meeting Joe Joyce in a fight that will air on BT Sport Box Office in the United Kingdom, and most likely on ESPN+ in the United States.

Dubois (14-0, 13 KO) and Joyce (10-0, 9 KO) have similar levels of pro experience, but are actually at pretty different career stages. The 22-year-old Joyce is a true prospect, young and with miles and miles ahead of him in his professional career, while Joyce is a 34-year-old who won the silver medal at the 2016 Olympics in Rio, and whose time to get going as a professional is now, given his age.

Joyce had been set to meet Marco Huck for the vacant European heavyweight title in January, which would’ve seen him travel to Germany to face the veteran ex-cruiserweight titleholder, but that fight was scrapped when Huck suffered an injury.

Because of that, promoter Frank Warren began fully hyping the idea of Dubois and Joyce squaring off now instead of holding off on it any longer. It’s a fight that’s been in the works for nearly a year, since Joyce signed with Warren and the two shared a bill in July, where Dubois knocked out Nathan Gorman and Joyce won a decision over Bryant Jennings. They’d even been ordered to meet for the vacant British heavyweight title, but Joyce stepped aside and allowed the Gorman bout to happen.

There’s really no question when you take age into account that Dubois seems to have the much higher ceiling, but Joyce is a big, sturdy, hard-hitting heavyweight who is fully what he’s going to be, you’d figure, while Dubois is still that more traditional, young prospect fighter. And while Dubois was very impressive wiping out Gorman the way he did, his other wins in 2019 were all carefully selected, including his victories since over Ebenezer Tetteh and Kyotaro Fujimoto.

Joyce, meanwhile, has that win over Jennings, which may well be a better win than any on Dubois’ record to date.

It’s a genuinely intriguing matchup and a good one that should have fight fans excited. Two guys who want to make their mark in boxing’s glory division taking a real swing against one another; there’s nothing not to like there, really.