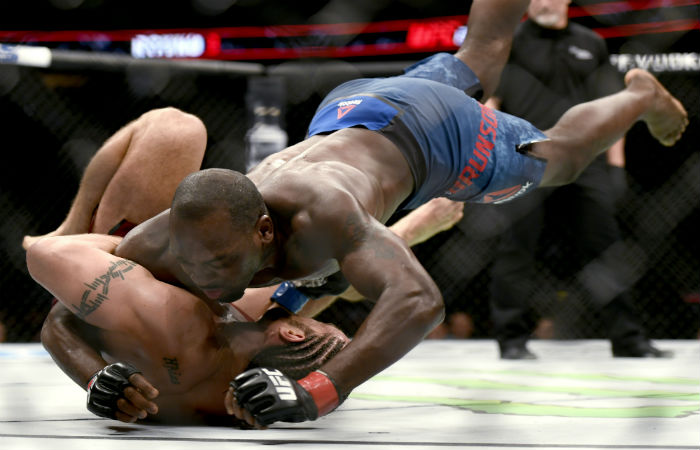 Derek Brunson delivered on his promise that Kevin Holland’s constant trash talk before and during their fight at UFC Vegas 22 wouldn’t change the result.

Over five rounds, Brunson consistently out wrestled Holland and kept the outspoken middleweight on his back where he struggled to get back to his feet much less generate much offense. Brunson was methodical with his grappling to ensure he always controlled Holland, which led to a unanimous decision on the judges’ scorecards.

“I wanted to knock him out,” Brunson admitted after having his hand raised. “Everyone can’t be pretty. Dana White, Mick Maynard, Sean Shelby, I’ve been putting in mad work in this division for so long. I wasn’t really too excited about this matchup. I wanted a top five [opponent].

“They probably didn’t like my performance too much so give me a top five and let’s see what happens.”

An early slip from Holland put him down on the ground and that was a harbinger of things to come as Brunson was quick to take advantage by jumping into his guard. From there, Brunson began hammering away with punches while also maintaining control on top to never give Holland any kind of room in order to escape his grasp.

While Holland was chattering the entire time, Brunson wasn’t playing any games while continuing to rain down with punches and elbows.

In between rounds, Holland spent his time shouting at former lightweight champion Khabib Nurmagomedov, who was sitting cage side, while asking for wrestling advice. Holland continued talking as he gave Brunson credit for a good start but then he finally started unleashing his own offense in return.
With Brunson willing to trade strikes with him for a moment, Holland unleashed several stinging shots that rattled the middleweight veteran and put him in trouble on the feet. In order to slow Holland down, Brunson intelligently grabbed onto a leg and then brought the fight back down to the canvas again.

From there, Brunson realized that his easiest path to victory was going to come on the ground as he repeatedly dragged Holland to the mat where he peppered away with strikes, although not really doing a ton of damage. Still, Brunson was constantly pressing down on Holland, who looked lost on the bottom while just biding his time until the horn sounded.

In the fleeting moments when the fight stayed on the feet, Holland was clearly the better striker but he just couldn’t do enough to keep Brunson away from him, which led to those repeated takedowns.

With less than five minutes remaining, Holland actually managed to trip Brunson down to the ground — the first time he’s ever been taken down in the UFC — but as much as that put a smile on his face, it was too little, too late. Brunson eventually got back to his feet and dragged Holland down one last time until time expired.

It may not have been the jaw-dropping performance he wanted but Brunson thoroughly dominated Holland for the better part of 25 minutes to secure yet another important win at 185 pounds. Afterwards, Brunson once again called for a fight against a higher ranked opponent and after four wins in a row, it might be tough to deny his request.

“[Paulo] Costa, what’s up man,” Brunson said during his post-fight interview. “I saw you just pulled out of a fight. I’m still here for you. Me and Costa, that sounds like a fight I’d like to have.”