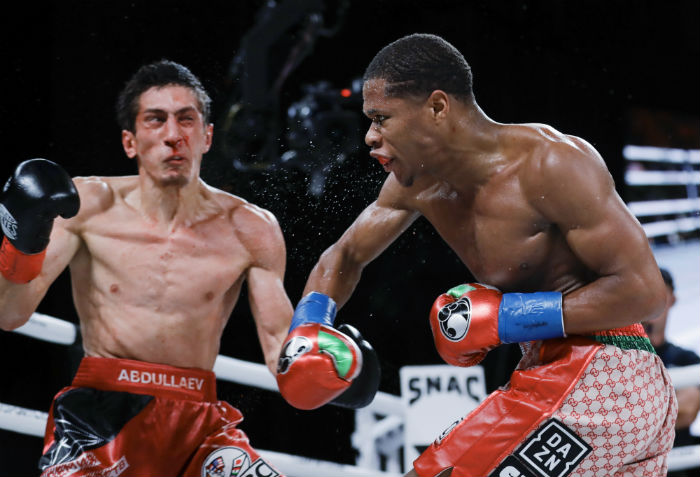 Devin Haney didn’t have the performance he promised tonight against Yuriorkis Gamboa, but he remained unbeaten and retained the WBC lightweight title with a virtual shutout victory over 12 rounds in the DAZN main event.

The 38-year-old Gamboa (30-4, 18 KO) was really never in this fight, but he not only didn’t get stopped by Haney, he didn’t wind up adding to his career total of 14 trips to the canvas, either. Haney had barked about wanting to dominate Gamboa more than anyone ever has, about wanting to drop him four times before finishing the Cuban veteran, but Gamboa was never in any serious trouble.

Haney, frankly, was rather dull in this fight, and it’s just a thing that has to be discussed for a guy looking to become a superstar in the sport. He didn’t press the action a whole lot on Gamboa, who was coming in off of a torn Achilles, and despite what the DAZN team said or didn’t say, it was clear the older fighter, who also is under-sized at 135 and always has been, no longer has near the mobility he did even five years ago, let alone in his prime a decade ago.

Gamboa survived largely by holding a lot and also simply not fighting in his old aggressive style, the thing that used to get him clipped and dropped fairly frequently for as good as he was. And Haney just sort of cruised with that; it’s smart boxing, because if Gamboa didn’t try to force a fire fight and land something big, he had no chance of winning. But it didn’t meet the expectations Haney tried to set for himself and for this fight, particularly considering he argued with critics who said it wasn’t a good fight. And in the end, it wasn’t.

“I thought I put in a workmanlike performance. I wanted the knockout, but he was a crafty veteran, doing a lot of holding, so it is what it is,” Haney said. “I knew he was gonna come in and be scrappy and do anything to survive, and that’s what he did.”

Haney said his surgically repaired shoulder “felt great, 100 percent,” and that he didn’t think there was any ring rust on him. He then turned his attention to what’s next.

“There’s a lot of big fights out there. I’m here and I’m not going anywhere. I want to make these big fights,” he said. “Fighting someone like Gamboa was a stepping stone, but I’m here for the big fights to bring the best out of me.”

As for a specific target, he called out the biggest dog at 135.

“Teofimo Lopez is the one with the rest of the belts, so that’s the main fight I want to make happen.”