Dillian Whyte: Wilder is injured, I should fight Fury next 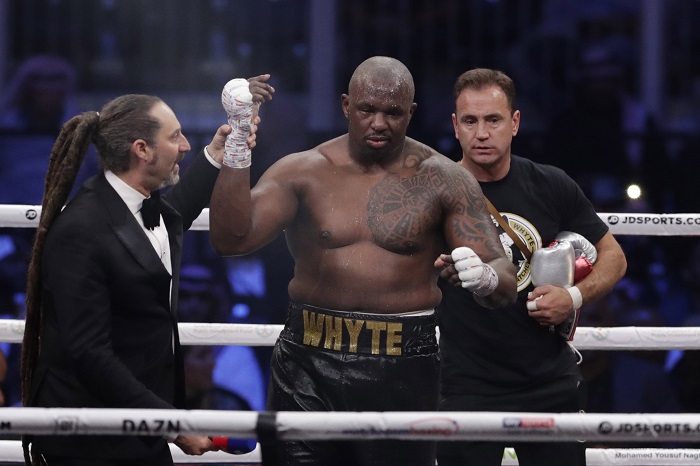 British heavyweight Dillian Whyte believes he should be the one that gets the next crack at the WBC champion Tyson Fury.

Whyte has been in the mandatory position for three years now, but he is yet to get his title shot. “The Body Snatcher” will have to wait for a third fight between the former champion and “The Gypsy King”, but that bout won’t take place in the next three months, which means Whyte will have to wait almost 9 more months to eventually get a title shot.

It seems though Whyte is not keen on waiting anymore and he wants to participate in the big fights instead of Deontay Wilder who had surgery last month.

Recently Whyte said that the WBC President Mauricio Sulaiman needs to be more forceful about ensuring Whyte fights for the WBC title.

“ Mauricio Sulaiman says a lot of things, and don’t do a lot of things. I don’t know, you know. I have no idea what to say. It makes me angry, and it’s frustrating that he’s saying one thing, then he’s doing another thing. Number one, Tyson Fury refused to fight me in a WBC-mandated fight for the WBC diamond belt. Secondly, they took my mandatory away and gave Tyson Fury the mandatory position, after fighting Otto Wallin, who is a million-ranked in the world. It’s a joke. How can he come back and fight – what’s the geezer’s name? Tom Schwarz, and Otto Wallin or whatever, and then end up being the mandatory challenger?

“After I’ve been fighting back-to-back, top-10 contender, they suspend my mandatory position without true cause or proper evidence or anything. It’s a joke. It’s a joke. And I don’t care whether Tyson Fury or Wilder is contracted. Wilder is injured, so they should mandate Tyson Fury to fight me, as they’ve done already before. They mandated me to fight him for the diamond belt. Then they took it away, but after Tyson Fury refused to fight me. He refused. It wasn’t me that refused. I accepted the fight that was mandated by the WBC. He refused to fight me, and then after, I’m being punished and they reward him for fighting Tom Schwarz after being off for three years. It’s a joke. It’s an absolute joke.”

“People have to come together in the boxing world,” Whyte said, “and try and just put as much pressure on them as they possibly can because I don’t think they really care, to be honest. But, you know, like you’re meant to be a just organization. You know, I’ve done everything. I’ve done everything. I’ve been risking the number one position since 2017, I think, and I’m still here risking it. I’m here fighting these guys. Povetkin was number one in the WBC, which I’m gonna fight. Wilder was [supposed] to fight him. That fight didn’t happen. I’ve beat [Robert] Helenius, I’ve beaten Dereck Chisora, I’ve beaten this guy, I’ve beat that guy, I’ve beaten two former world champions. It’s crazy. It’s crazy. What more can I do, you know? I’ve spent hundreds of thousands in sanctioning fees and I’ve won every single WBC belt I’m eligible for, apart from the world title.”