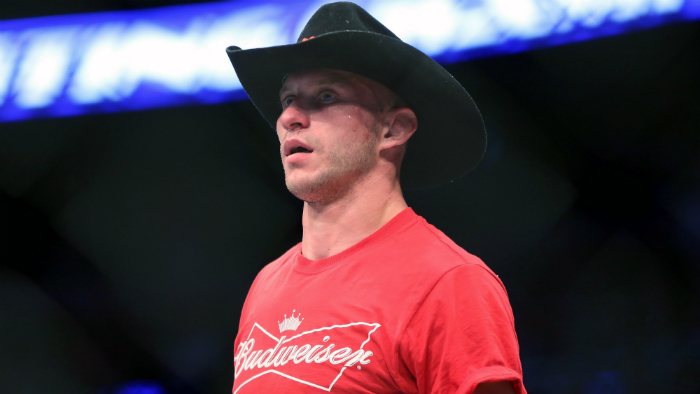 Donald Cerrone is unsurprisingly thrilled to finally get his chance to share the octagon with Conor McGregor.

After years of having the fight dangled in front of him, Cerrone (36-13 MMA, 23-10 UFC) signed to fight McGregor (21-3 MMA, 9-2 UFC) in the main event of UFC 246, which takes place Jan. 18 at T-Mobile Arena in Las Vegas and airs on pay-per-view. “Cowboy” admitted that, even after he’d put pen to paper and it became official, he was in disbelief the matchup actually came to fruition.

Cerrone’s deal to fight McGregor also came with a new UFC contract attached. Cerrone, who is already tied for the record for most fights in UFC history at 33, is now linked to the promotion for seven more fights. The bout with McGregor will be his most financially lucrative to date – but it’s not money that’s going to send him off from the sport.

“I’m stoked,” Cerrone told MMA Junkie on Friday. “My contract is good with the UFC anyway, but it’s not the money fight everyone thinks. It’s like, ‘Oh, you’re fighting Conor, you’re set for life.’ It doesn’t work like that. I did get a little bit more money, so that’s cool. But it’s not like I’m done and I can just retire after this and buy a yacht and see you guys in the Caribbean.”

The fact Cerrone and his team were able to reach terms with the UFC and get the fight done is no shocker. However, the matchup being scheduled to take place in the welterweight division certainly caught many off guard. The idea to fight at 170 pounds rather than lightweight was apparently McGregor’s, and neither the UFC nor Cerrone objected.

Although Cerrone has fought many more times than McGregor at 170 pounds, he said he doesn’t think the weight class impacts how the fight will play out.

It’s been more than three weeks since the finalization of Cerrone vs. McGregor became public. Since then, McGregor has been nothing but friendly. The clips of the press conference exchange between the two from 2016 were immediately played on loop after the news broke, and Cerrone said it was entertaining to see that.

That exchange happened a long time ago, though, and both men have endured a lot – both in and out of the cage – since. Cerrone said he’s not surprised McGregor hasn’t gone on the verbal offensive (yet), but feels any trash talk toward him would be reaching, anyway.

“I’m kind of a straight shooter,” Cerrone said. “I’m not a guy that talks (expletive) much. I don’t do anything crazy out in the public or outlandish that he would have bad things to say. What crazy thing can he come up with that he can say?”

If you flip the script, though, Cerrone has a lot of ammunition he could fire McGregor’s way in the leadup to UFC 246. The Irishman’s personal mishaps in recent years are well documented, and Cerrone could easily throw the past in McGregor’s face as promotional fodder for the matchup.

Cerrone, though, said that’s not his style.

“I’m not going to talk badly about him,” Cerrone said. “I don’t really care. He does his life and whatever he wants to do he can. I’m just as wild and crazy as him, but in a different way. The media keep asking me, ‘What do you think of the trouble he gets in?’ The guy lives under a microscope. Anything he does people want to blow up and make a big deal about it. That’s his life. I would never even dig at something like that. Hell, no.

“Only goddamn thing I’m talking about is fighting only. Anything outside of it – that’s you. You do what you want to do. You want to meet me in the cage and fight – fighting that’s a whole different thing – but I’m not going to bring up anything from the past or anything he’s done outside the octagon. What the dude has done inside of the cage, and what he’s done for the sport is amazing. I’m honored to fight a guy like him and it’s going to be one hell of a battle and I’m looking forward to it.”

When talking about fighting, Cerrone said he intends to deliver the action in the octagon that every fan hopes for. Although Cerrone seemingly has a stylistic advantage over McGregor on the ground, he said his plan is stand and trade. Cerrone and McGregor have netted some of the most brutal knockouts in the sport throughout their career, and Cerrone’s hope is to add one more memorable moment to the highlight reel – win or lose.

“I’m going to go out there and stand up with him because that’s what everyone wants to see,” Cerrone said. “Someone said earlier that’s like fighting not to win almost, but hell no. I’d rather go down in history as having the greatest fight ever and losing than fighting to just win and winning. I’m going out there to put on the line and throw down and give everyone what they want to see. To me, that’s what I want my legacy to be. I don’t want to be the guy that took the easy way and just ran the whole fight and tried to point fight. Hell, no. I’m going to stand and try to throw down.”

In the weeks since the UFC 246 main event was booked, UFC president Dana White has said McGregor will likely get a lightweight title shot with a win. No such comments have been made about Cerrone, though, and he said he hasn’t been given any assurances about next steps. A UFC title remains part of Cerrone’s goals, however, and despite entering the matchup on a two-fight skid, knows the significance of the opportunity in front of him.

“I don’t get into the politics anymore,” Cerrone said. “That’s why I got a (expletive) manager because they can get in there and do the dirty negotiating. All I do is show up and fight and do what I love and have fun. … The goal hasn’t changed. I’m going to get that belt. That’s the last thing I’ve got to do for my legacy so I’m still on the path, still going to keep going and that’s why this sport’s hard. You got to be on top of your game at all times. I had a couple slips but hell, I’m back.”

McGregor is back too, though, and he appears to be motivated and hungry to make a big run in 2020 and restore the legacy which has been somewhat tainted in recent years. Cerrone said he loves that, because he wants the best version of “The Notorious” available when they finally share the octagon next month.

“(I’m expecting) the same hungry kid there’s always been,” Cerrone said. “He’s coming to knock my head off. There’s a lot weighing on this fight so I’m probably going to get the best Conor McGregor out there.”