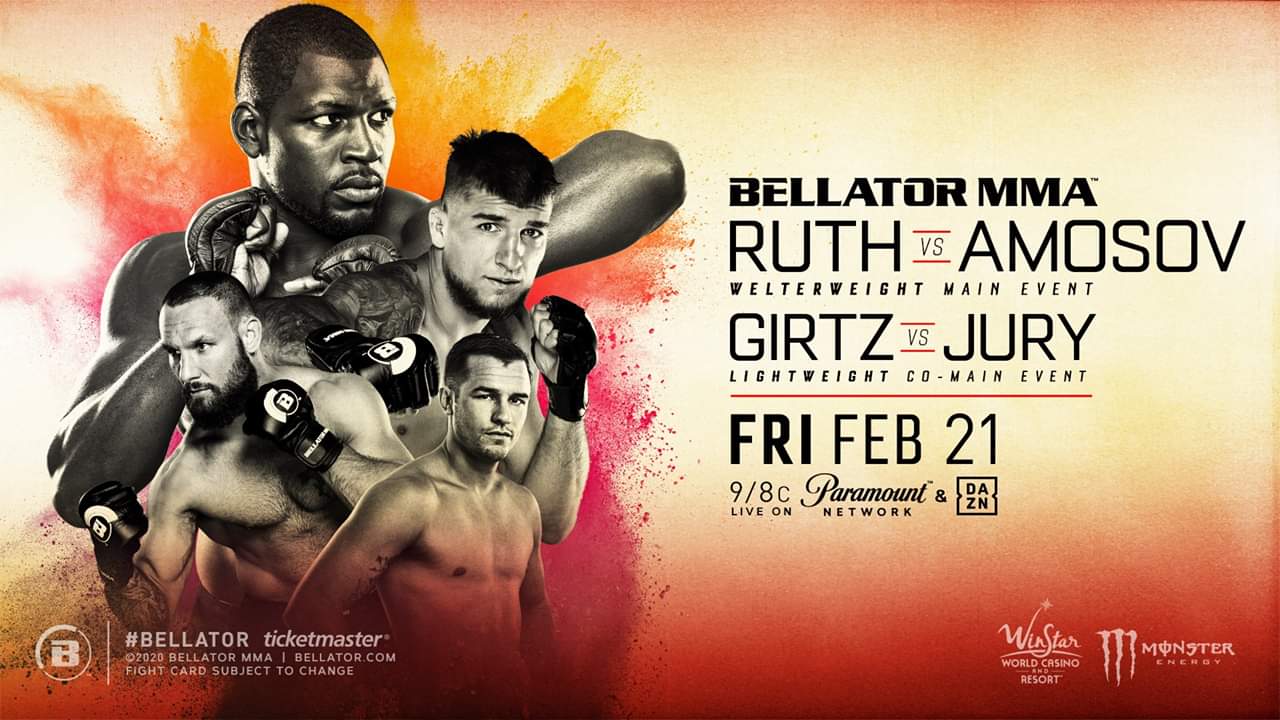 Bellator MMA has just announced the main event for the Bellator 239 event.

The show is scheduled to take place on February 21 at WinStar World casino and Resort in Thackerville, USA.

The event will be headlined by an exciting matchup featuring a battle of surging welterweight contenders, as three-time NCAA wrestling national champion Ed Ruth (8-1) takes on undefeated Ukrainian standout, Yaroslav Amosov (22-0). The co-main event will see the heavy-handed Brandon Girtz (16-8) face off against Myles Jury (17-5) in a clash of lightweights looking to cement their status as top contenders.

Coming off of a gritty victory over Jason Jackson at Bellator 231 last October, the 29-year-old Ruth will enter the Bellator cage for the 10th time in his four-year professional career on Feb. 21 in search of his ninth promotional win. With six finishes his first nine contests, the wrestling-standout will look to continue his impressive run through Bellator’s welterweight rankings in a marquee matchup with Amosov. Signed by Bellator in 2015, “EZ” entered the promotion following a three-year NCAA Division I national championship run.

Entering the Bellator cage for the fourth time, Bellator 239 will mark the first main event of Amosov’s run with the promotion. Undefeated since turning pro in 2012, the undefeated Ukrainian athlete has defeated Erick Silva, Gerald Harris and David Rickels en route to his upcoming matchup with Ruth. Nicknamed “Dynamo,” the 26-year-old served as the alternate in 2019’s Welterweight World Grand Prix, but now has his sights firmly set on a shot at Douglas Lima’s newly won championship belt.

On the heels of his victory in a 2019 “Fight of the Year” candidate against Saad Awad, Girtz returns to action in a familiar venue, having competed at WinStar four times prior. With career wins against Awad, Derek Campos and Melvin Guillard, a victory at Bellator 239 over Jury would arguably be the most notable win of the Minnesota-native’s nearly 11-year MMA resume. Rarely without his canine companion, Vicii, during fight week, Girtz currently trains alongside fellow Bellator competitor Grant Neal at Genesis Training Academy in Arvada, Colo.

Hailing from Hazel Park, Mich., Jury will be making his second appearance for Bellator after facing Benson Henderson in his debut. A veteran of the UFC, the 31-year-old has been a mainstay of the 155-pound division – the weight class where “Fury” saw most of his early success, including a remarkable 15-fight winning streak to begin his career. With 13 career finishes and key victories over the likes of Diego Sanchez, Michael Johnson and Takanori Gomi, the Alliance MMA-product is one to watch in Bellator’s lightweight division.